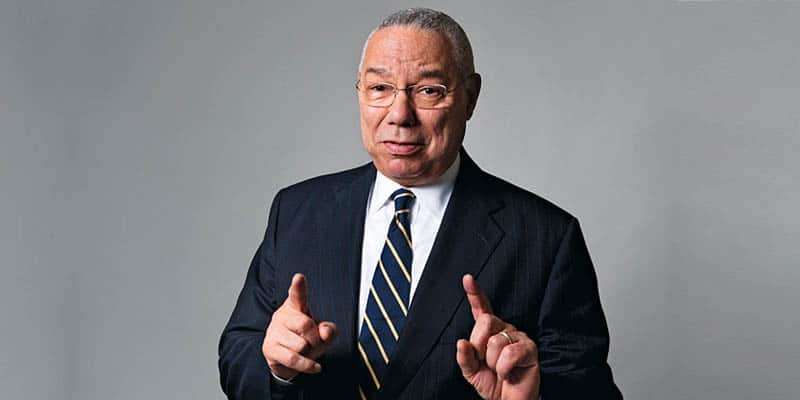 Former US Secretary of State Colin Powell endorsed Democratic Presidential candidate Joe Biden to be the next President of the United States.

An endorsement from any politician for a member other side of the aisle is never a good look and would normally represent a blemish that a Presidential campaign would prefer to ignore or move beyond.

President Trump is not one to let things slide, however, and is not afraid to go all-in when addressing an opponent, regardless of their previous relationship or what political party they belong to.

It seems that Trump and his team may have been anticipating Powell’s flip, as he’s now throwing haymakers in Colin’s direction via Twitter, and many of them are connecting.

Colin Powell, a real stiff who was very responsible for getting us into the disastrous Middle East Wars, just announced he will be voting for another stiff, Sleepy Joe Biden. Didn’t Powell say that Iraq had “weapons of mass destruction?” They didn’t, but off we went to WAR!

Trump has long been a critic of the wars in the Middle East, and he is now coming out hard against Powell for his involvement.

Now, the Daily Beast is reporting that Trump’s campaign is anxious for former President George W. Bush to offer his endorsement to Biden, as well.

A Biden endorsement from the two individuals who are viewed as the most responsible for sending American soldiers off to fight in what many think was an unjustifiable war in the Middle East would represent the perfect storm for Trump.

With such endorsements, Trump could cut these “public servants” off at the knees with harsh criticisms regarding their previous actions, but the full impact of the affirmation will rely on whether Biden accepts or rejects their political alms.

Although it is debatable at this time what the effect Powell’s endorsement will have on the Presidential election odds, there is the possibility that it could inspire more Republicans to have the courage to speak out against President Trump.

The possibility has now been recognized by political sportsbooks, as odds have been posted on the next high-profile Republican Party member that will flip the script and start ridin’ with Biden.

Condoleezza Rice has historically stood alongside the GOP through thick and thin and may still have intentions of entering the political fray once again. Rice is also a player in the wars in the Middle East, and she would likely inspire comments from Trump similar to those directed at Powell.

Although Cheney is a key figure in the unpopular wars in the Middle East, a Biden endorsement from him would be a political shocker. Cheney’s decisions seem largely based on his financial interests, and the old, rich, Caucasian demographic is a stronghold for Trump.

A Cheney endorsement of Biden would indicate a surrender of sorts, sending a clear message of “abandon ship” that could echo throughout sections of Trump’s older voter base.

The odds for Cheney going through with the endorsement of a Democratic Presidential candidate are fairly low, but a wager on him doing so offers the opportunity for a large payday. A wager of $100 would earn $425.

Although Romney is a prominent Republican figure on the national political scene, he and the President have butted heads constantly dating back to Trump’s historic campaign run in 2015-2016.

Romney is actually favored to endorse Biden, and if and when he does, it should not surprise anyone. Romney would project weakness if he didn’t come out strong against Trump after their recent war of words regarding his participation in protests opposing police brutality against African Americans.

One thing is clear: Donald Trump is a fighter, and voters can count on him to go the distance, no matter what obstacles attempt to stand in his way.