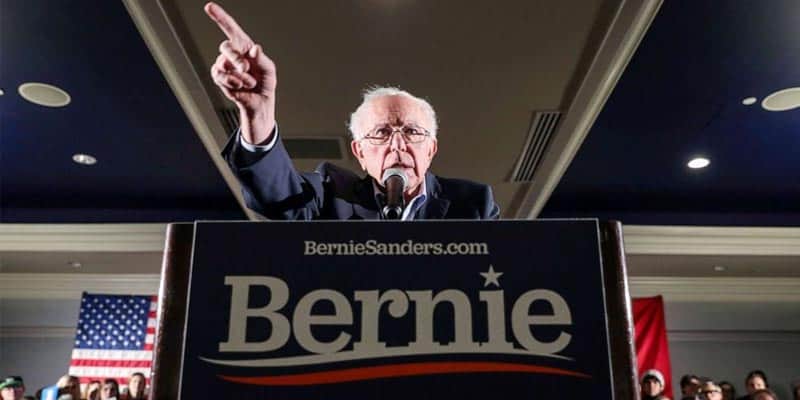 Do you feel the Bern yet?

Because there’s a new candidate at the top of the latest 2020 Democratic nominee betting odds.

And the oddsmakers have made it clear: They favor the Bern.

Bernie Sanders’ odds show he’s the favorite to win the Democratic nomination for the first time after surpassing former Vice President Joe Biden for the top spot today, according to the most recent update to the political futures at BetOnline.

Sanders is now listed at +225 odds ($100 bet wins $225), and when converted to an implied probability, we can see the oddsmakers are giving him approximately a 30.77% chance of becoming the Democrats nominee.

After sitting relatively comfortably at the top of the board for the past couple of months, the betting odds for Biden indicate Obama’s VP is now second place, but not by much. Biden is listed at +250, which means he has roughly a 28.57% chance to become the party’s nominee.

It still looks like a two-candidate race, but interesting, Michael Bloomberg’s odds have seen a noticeable spike in the most recent update.

The former New York City mayor, who’s currently the 14th richest person in the world with an estimated net worth of $58.8 billion, has spent over $200 million on advertisements as of a week ago.

As a result, the public bettors have catapulted Bloomberg into third place with +600 odds, a 14.29% chance, despite not being on the ballot in the first four primary states.

Coming in fourth is the odds for Elizabeth Warren, who continues to fall and is currently sitting at +800, an 11.11% chance,

Warren’s fall from grace began at the start of winter when she had over a 50% chance to win the nomination and shows no signs of slowing. Her campaign recently attempted a last-minute smear of Sanders by telling CNN that he—a feminist and honorary woman—said a woman can’t beat Trump in a December 2018 meeting.

After vehemently denying that he would ever say anything like that during the January debate, the CNN moderator tried to frame Sanders as a liar by stating what Warren claimed as fact.

Then after the debate, Sanders attempted to shake his longtime friend’s hand, only for Warren—who likely knew her microphone was hot—to reject the handshake and claim he called her a liar, which he never did, according to the transcripts.

🔍FACT CHECK: Did Sanders call Warren a liar?
❌FALSE: Sanders said "liar" once: "[Trump] is a pathological liar and he is a fraud."

Ultimately, it appears Warren’s snake-like tactic has failed, and the U.S. Senator from Vermont is surging at the perfect time with the 2020 Iowa Democratic caucuses only 17 days away.

According to a post-debate Reuters/Ipsos online poll of 681 Democrats and Independents, Sanders came out on top with 20% support, which is the most for any candidate still running. When compared to the previous poll, Biden was down four points to 19% and Warren was down three points to only 12% support.

Anything can happen before the first votes are cast on Feb. 3 but with little time remaining, it appears you can bet on Bernie being the Democratic favorite when primary voters head to the polls.