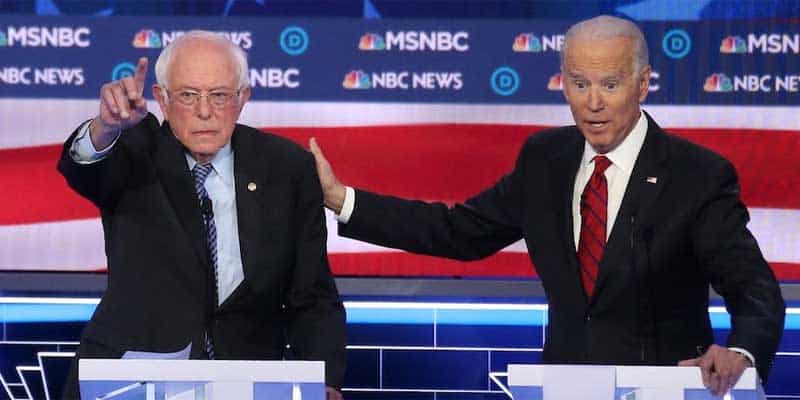 With three states in the books, the 2020 Democratic presidential race turns to South Carolina, the fourth and final early state primary to vote before Super Tuesday.

And the updated South Carolina primary odds show former Vice President Joe Biden listed as a slight favorite over Vermont Sen. Bernie Sanders to win the election in the Palmetto State, which is scheduled to be held on Sat., Feb. 29.

*Graded winner: As determined by the South Carolina Election Commission.

Sanders picked up a massive win on Saturday, dominating the Nevada Democratic caucuses, where he was heavily favored to win.

After the convincing win on Saturday, Sanders’ betting odds indicated he was the early favorite to win South Carolina, receiving -140 ($1.40 bet wins $1).

However, it appears the betting public felt there was substantial value on Biden’s odds, who was listed at +110 ($1 bet wins $1.10).

The adjustment from the Bovada oddsmakers now shows the two Democrats in a neck and neck race, with Biden now receiving a slightly higher chance over Sanders to win the fourth stop on the campaign trail.

Both candidates combine for a 94.5% chance, meaning the rest of the field has only a 5.5% probability of pulling the upset.

Apart from the co-favorites, Steyer’s odds—at +5000 ($1 bet wins $50), giving him a 1.8% chance to win—should be the only other candidate that receives any betting consideration.

The billionaire activist has consistently polled third in South Carolina and currently receives 16.5% support on average. Additionally, Steyer has spent over $13.3 million on ads in the state and has qualified for the Feb. 25 debate at the Gaillard Center in Charleston.

Who Will Win South Carolina?

The South Carolina Democratic primary election has 54 pledged delegates up for grabs—the most so far—and the eventual winner must win over African American voters, who regularly account for roughly 60% of the party electorate in the state.

To put in perspective just how vital the black vote is in South Carolina: African Americans only accounted for 10% of the Democratic electorate in Nevada, which was the most diverse state of the primary so far.

Biden won the black vote in Nevada with 39% support and was the only demographic that Sanders, who received 27% of the votes from African Americans, did not outright win.

According to the SC polling average from RealClearPolitics, Biden still maintains a slight edge but has suffered a massive drop in the Palmetto State since the primary began.

At the start of the year, Biden polled at 35% in South Carolina and held about a 20-point lead over Sanders, who received 15.3% on average on Jan. 1.

Fast forward three contests later and Biden’s support has fallen to 24.5% while Sanders, who’s earned the most votes in each of the first three states, has risen to 21.5%—putting him only three points back and within the margin of error.

Sanders clearly has the momentum—national polls show him at 29.3% and with a 12-point lead over Biden at 17.2%—but it’s unclear whether he’ll definitely smash through the former VP’s “firewall” in South Carolina.

African American voters will determine the winner of the South Carolina Democratic primary election, and whoever can win a majority of the 60% electorate will come out on top.

For now, it appears Biden will win by the slimmest of margins. However, if Sanders can swing enough black voters to his side before Saturday, then the Vermont senator might not only win South Carolina, but he might also deliver the knockout blow to Biden’s campaign.

According to the latest 2020 Democratic presidential nominee odds, Sanders is now a heavy favorite to win the party’s nomination following his victory in Nevada over the weekend.

Sanders is now listed at -130 odds ($1.30 bet wins $1) to become the Democratic nominee, giving him an approximately 56.52% implied probability—a record high mark for the Vermont senator.

Mike Bloomberg’s odds to win the nomination, +400 ($1 bet wins $4), indicate he’s the only candidate remotely close to Sanders, but his roughly 20% chance is a distant second at this point in the race.