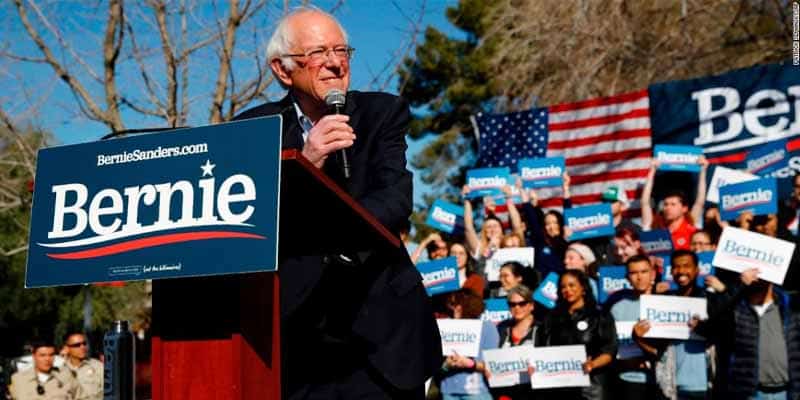 The third state of Democratic primary may already have a declared winner if the latest Nevada caucus betting odds are any indication.

The odds for Bernie Sanders already favored the Vermont senator winning the third contest, but his chances have increased to an all-time high following Wednesday’s debate in Las Vegas.

*Graded Winner: The candidate receiving the greatest number of delegates allocated by the precinct-level caucuses will be graded the winner.

With one day until the Nevada caucuses on Sat., Feb. 22, Sanders has further widened the gap between him and the other Democratic candidates still in the race.

At -900 odds ($900 bet wins $100), Sanders now has a roughly 90% chance to win Nevada, and the latest polling data out of the state appears to indicate that no one else is even within striking distance.

According to a new KLAS-TV/Emerson College Nevada poll, conducted Feb. 19-20, Sanders received 30% support and held a 13-point lead over Buttigieg. Here are the results that were released on Friday:

Will Bernie be the nominee?

It certainly appears it’s going to take a lot to stop Sanders from winning the 2020 Democratic presidential nomination at this point in the race.

According to the Democratic nominee odds, Sanders is listed at +100 ($100 bet wins $100), which gives him “even odds.” For those unaware, even odds essentially means the outcome has a 50/50 chance of happening.

On the surface, it may seem like a 50/50 chance isn’t good, but it’s essential to understand that Sanders is a single person with a 50% chance while all other Democrats combined also have a 50% chance of becoming the nominee.

Talks of a possible brokered convention continue to be had among the pundits, but what they don’t tell you is that this conversation literally happens every time a presidential primary is held.

You only need to go back to 2016 and see how that’s all the Republicans were talking about in regards to Donald Trump possibly winning the nomination.

A brokered convention will not happen, especially in 2020. Whoever finishes with the most delegates, not 1991 needed, will be the nominee. Not doing so would be political suicide and means Trump will definitely win reelection.

Also: There won’t be eight candidates remaining when the convention is held over the summer. After Super Tuesday comes and goes, there may be three Democrats (Sanders, Bloomberg, Biden) left, at most, but even that might be a stretch.

For now, here are the latest odds to win the Democratic nomination before the Nevada caucuses are held Saturday.