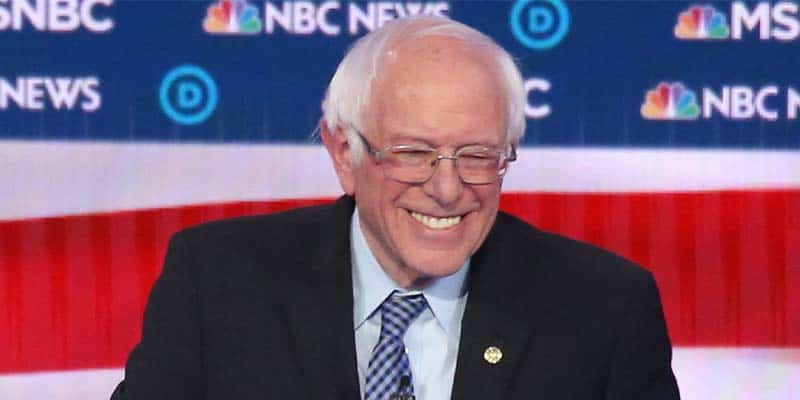 After the dust settled from Nevada debate, there was one clear winner, one big loser, and four Democratic candidates who cemented themselves as players in the game instead of game-changers.

But before discussing winners and losers from the debate, let’s see how the public bet on the 2020 election odds once the candidates walked off the stage.

Bernie Sanders’ odds to win this Saturday’s Nevada caucuses, as well as the Democratic nomination, are heavily favored, with the latter hitting a record high following last night’s debate in Las Vegas.

The updated Nevada Caucus odds for Sanders list him as the clear favorite at -650 ($650 bet wins $100), giving the Vermont senator an implied probability of 86.67% to win the third primary contest.

Although Sanders’ chances are unchanged from the NV odds before the debate, he continues to hold a massive advantage over Biden, who is listed in second with +900 odds, giving the former Vice President a roughly 10% chance to pull the upset this weekend.

Warren’s Nevada odds were +10000, 0.99% chance before last night, but now she’s listed at +2500, 3.85% chance. Her movement is likely due to being undervalued since the Massachusetts senator polls third on average in Nevada, but her odds placed her in sixth place yesterday.

Considering Sanders polls at 30% support in Nevada—14 points higher than any other candidate, according to RealClearPolitics—it’s highly unlikely any other Democrat receives a majority of the state’s 36 pledged delegates.

What about the Democratic nominee odds? Were there any significant changes since last night?

Sanders’ odds to win the 2020 Democratic presidential nomination hit a record high following the Nevada debate. At Bovada, the Vermont senator is now listed at +100 ($100 bet wins $100), meaning he has “even” odds or approximately 50% chance to become the party’s nominee.

Yesterday, the Democratic nominee odds showed Sanders at +125, which gave him a roughly 44.44% before the debate. With even odds, the sportsbook views the primary as Sanders vs. the field at this point in the 2020 race.

Bloomberg’s betting odds to win the nomination—was +200, 33.33% implied probability—took a beating, but not quite as bad as the one he received from the other five candidates on the stage last night.

The former New York City mayor is now listed at +400 odds, giving the Sixty Billion Dollar Man and his Super Tuesday ad spending strategy an approximately 20% chance of paying off.

With a massive 30 percentage point difference now between first and second—compared to the roughly 11.11 percentage point margin before the debate—the oddsmakers have installed Sanders as the clear favorite to become the eventual Democratic nominee and face off against President Donald Trump, the Republican incumbent, in the general election.

One Clear Winner From The Nevada Debate

All eyes were on Bloomberg during his first debate appearance, and to say it was a catastrophe might be the understatement of the entire 2020 election cycle.

However, his performance leaves much to be desired, but overall, most likely won’t affect his support too much. Bloomberg’s Super Tuesday television and radio ad buy strategy targets people who aren’t closely following the race.

As the clear frontrunner, Sanders continued to brush off the same tired, scripted attacks throughout the evening. However, the reason the Vermont senator won the debate isn’t that he successfully blocked all the punches thrown his way.

Instead, Sanders’ answer to close out the evening showed voters that he’s ready to fight another round in one corner of the ring while the other five Democrats sit in the opposite corner, gasping for air and getting their wounds cleaned up.

And most importantly: When the going gets tough, the other five candidates on the stage showed last night that they are willing to say or stand for anything, even if it means turning the hypocrisy dial to an 11.

The final question asked to all candidates by moderator Chuck Todd may go down as the moment Sanders sealed his win for the Democratic nomination. Below you can read the question and each candidates’ response, according to the debate transcript:

TODD: Should the person with the most delegates at the end of this primary season be the nominee, even if they are short of a majority?

BLOOMBERG: Whatever the rules of the Democratic Party are, they should be followed.

WARREN: But a convention working its will means that people have the delegates that are pledged to them and they keep those delegates until you come to the convention.

BIDEN: Play by the rules … let the process work its way out.

BUTTIGIEG: Not necessarily. Not until there’s a majority.

SANDERS: Well, the process includes 500 super-delegates on the second ballot. So I think that the will of the people should prevail, yes. The person who has the most votes should become the nominee.

TODD: Thank you, guys. Five noes and a yes.

One of the arguments frequently made by Democrats, for the most part, over the years is that the popular vote should decide the presidency, not the electoral college.

Every single person gets exactly one vote, and the will of the people should decide our leaders. And because voting is a fundamental right, making sure every voice is counted equally means the election system would be fair for all Americans across the country.

The issue of doing away with electors for the general election, and potential everywhere, was amplified after Hillary Clinton won the popular vote by nearly three million votes in 2016, but lost to Donald Trump because he received 304 electoral votes compared to her 227.

Electors and delegates are different but serve the same role: represent a group of voters during an election.

You can’t be in favor of eliminating electors for the general but against doing away with delegates for the primary.

The entire point of the argument is that the people’s vote should equally and directly count toward their representatives, and not toward a person in the middle who may or may not vote for your candidate.

There’s no such thing as a safe bet. But seeing Sanders stand firm with his answer, and watching how the others crumbled under the pressure of the question, is why he is the Democratic Party’s best chance of beating Trump at this point in the race.

If Sanders has the most delegates, but not 1,991 required and does not receive the nomination via brokered convention, Trump will win on Tues., Nov. 3, 2020.

And this time, Democrats will only have themselves to blame for gift-wrapping him the White House.