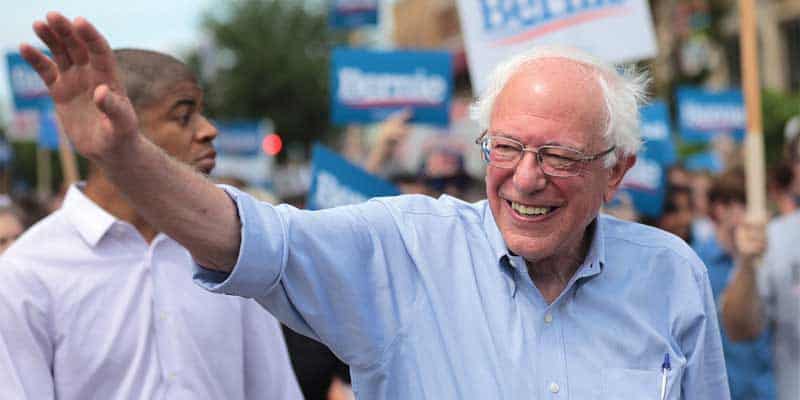 Heading into the ninth Democratic presidential debate, the oddsmakers are feelin’ the Bern like never before.

Bernie Sanders’ betting odds—for both the Nevada caucuses and 2020 Democratic nominee—have hit a record high just hours before the candidates take the stage at Paris Theater in Las Vegas, Nevada.

When looking at the current Nevada Caucus odds, it’s clear Sanders holds a massive lead over his Democratic rivals.

Bovada sportsbook currently listed Sanders at -650 odds ($650 bet wins $100). When converted to an implied probability, we can see the oddsmakers give the Vermont senator an approximately 86.67% chance to win the third primary state.

Early voting began earlier this week, and the NV caucus results will be reported on Sat., Feb. 22. According to the Nevada average polling at RealClearPolitics, Sanders currently polls at 30% support and holds at 14 percentage point lead over Joe Biden, who sits at 16% support.

As a result, Biden’s betting chances check-in at a distant second, with oddsmakers listing him at +900 ($100 bet $900). At those odds, the former Vice President has about a 10% chance to pull off the upset.

While the Democratic nomination odds are a bit tighter, Sanders has remained the favorite since late-January, and his chances of becoming the nominee have steadily increased over that period.

Former New York City Mayor Mike Bloomberg appears to pose the only significant challenge to Sanders at this point in the race, with oddsmakers at Bovada putting the billionaire in second place on the board and listing Bloomberg’s odds at +200, giving him a 33.33% chance to win the nomination.

In addition to the 2020 presidential futures for the Nevada caucuses and Democratic nomination, there are also debate prop bets available for action before the candidates take the stage tonight.

The Nevada debate props were initially released yesterday. Still, you can find the updated odds below, along with some of the newest additions on the prop betting board at BetOnline sportsbook.

Will Bernie Sanders say “damn” during the debate?

Will Bernie Sanders say “Epstein” during the debate?

Will “favorite” or “underdog” be said by any candidate?

Will “sports betting” or “gambling” be a topic at the debate?

Will “Hillary” be said by any candidate?

Will “Astros” be said by any candidate?

Over/Under: How many times will “Trump” be said by all candidates?

Over/Under: How many times will “billionaires” be said by all candidates?

Over/Under: How many times will “China” be said by all candidates?

Over/Under: How many times will “virus” be said by all candidates?