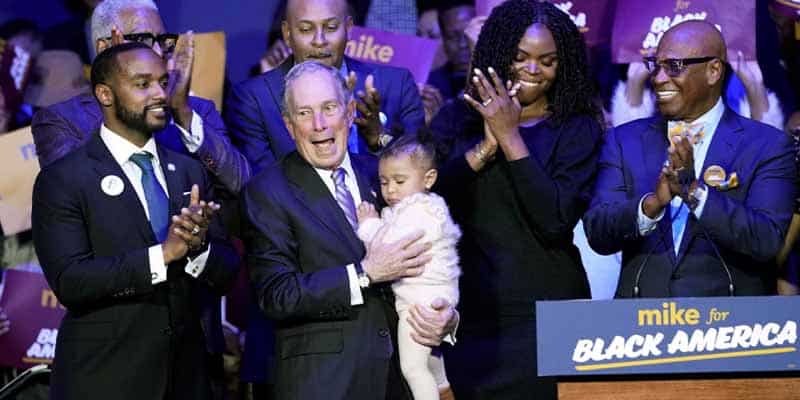 After spending more money on presidential primary campaign ads than any candidate in the history of the United States, the Sixty Billion Dollar Man will finally deliver his message on the debate stage—and not solely during commercial breaks.

Also, the first batch of presidential debate prop bets have been released, and we’ve got the scoop on the early odds before the Democratic candidates take the stage tomorrow night.

Bloomberg becomes the sixth Democrat to qualify for tomorrow night’s debate, hosted by NBC News, MSNBC, and the Nevada Independent. It’s the first time the former New York City mayor has qualified, and his 2020 campaign has confirmed he will attend.

Thanks to the Democratic National Committee removing the donation threshold last month, the Nevada debate qualification criteria opened the door for Bloomberg to make the stage upon receiving his fourth poll showing 10% or more support.

Will Bloomberg Buy The Nomination?

Despite not appearing on the primary ballot in Nevada, South Carolina, or the first two early states, Bloomberg has spent nearly $420 million (blaze it) of his own money on advertising in Super Tuesday states (so far)—ten times more than the $41.8 million spent by the Sanders campaign.

Here's a look at ad spending through today (including future reservations:

Whether Bloomberg’s big bet to bombard states voting on March 3 with ads is enough to buy the nomination remains to be seen. However, it’s undoubtedly helped his overall polling and Democratic nominee betting odds to this point.

The odds for Bloomberg currently have him listed in second place at +200 ($100 bet wins $200) to win the Democratic nomination, giving him a 33.33% probability.

After the Iowa Caucus app disaster, Sanders went on to win New Hampshire and has since surged in polls across the board, according to average national and state polling at RealClearPolitics.

Barring a major upset, Sanders appears to be a lock to win Nevada, where early voting is already underway ahead of the Feb. 22 contest. He currently polls at 30% and holds a 14 percentage point lead over Biden.

Over/under $60 billion to buy the Democratic nomination? Unfortunately, that’s not one of the prop bets available (yet) for tomorrow night’s Democratic presidential debate in Las Vegas, Nevada.

However, tomorrow’s debate at Le Theatre des Arts at Paris Las Vegas is sure to provide plenty of fireworks with all of the candidates ramping up attacks on Bloomberg in the past week.

Since the debate is being held in the gambling capital of America, online sportsbooks’ early props include some betting-themed odds. More lines will likely become available before tomorrow night, but here’s the proposition wagering currently available for the Nevada Democratic debate.

Will any candidate to say “Hillary”?

Will “underdog” or “favorite” be said by any candidate?

Will the topic of sports betting or gambling be brought up?

Over/Under: How many times will “billionaires” be said by candidates?

Over/Under: How many times will “Trump” be said by candidates?

Over/Under: How many times will “China” be said by candidates?

Over/Under: How many times will “virus” be said by candidates?