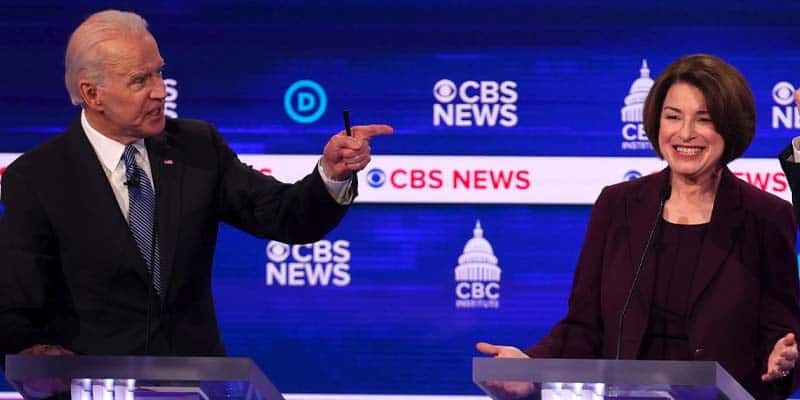 Is Amy Klobuchar The Best VP Bet For Biden, Democrats?

Joe Biden, the prohibitive favorite for the Democratic nomination, will pick a woman as his Vice Presidential running mate, but who she will be ultimately remain a mystery.

The VP odds for Amy Klobuchar, US Senator from Minnesota, have consistently stayed among the top two most likely women to get that long-awaited phone call from Biden.

But is Vice President Klobuchar a safe bet? No — but she should be in any political bettors’ “top 2-3 women” for consideration. In short: Klobuchar needs to be on your personal VP betting shortlist at this time.

Congressional Democrats have recently begun making their voice heard regarding who Biden, the 2020 Presidential Election underdog, should select to give his campaign a spark and potentially seal the deal for the party on Tuesday, November 3.

Klobuchar is currently listed at +415 ($100 bet would win $415), which would offer a substantial return on investment for political bettors backing her in the Biden Veepstakes.

While “Freudian slips” should not be the determining factor for any bet on the 2020 Democratic VP, Klobuchar may have let the cat out of the bag after she’d ended her campaign and endorsed Biden for President back in early March.

“I could not think of a better way to end my candidacy as hard as that was to do with our beloved staff and everyone else than to join the ticket,” Klobuchar said at a Biden rally before quickly correcting “to join the Joe Biden.”

Apart from giving away a bit too much of the private post-South Carolina conversion with the Biden campaign, Klobuchar is seen as a strong pick for the former VP for her potential influence on the Electoral College.

Although the 2016 US presidential election saw Hillary Clinton beat Donald Trump in Minnesota (1,367,716 to 1,322,951), the once sure bet for Democrats is now dangerously close to being flipped by Republicans.

Michigan, Pennslyvania, and Wisconsin are the three states Democrats circled after the loss, and party leaders know that Biden and his VP will need to rebuild the “Blue Wall” in the Rust Belt that Republicans finally broke four years ago.

However, keeping Minnesota is vital to Biden’s winning strategy. Klobuchar’s endorsement has already proved her voice is worth its weight in gold.

Biden managed to upset Bernie Sanders in Minnesota on Super Tuesday because nearly all of Klobuchar’s supporters voted for the former VP just days after she dropped out and made the crucial endorsement.

But whether Klobuchar’s endorsement of Biden was made in exchange for a spot on “the ticket” is something we’ll soon find out.

Across all online US sportsbooks and prediction markets, the 2020 Vice President betting odds have favored Kamala Harris, US Senator from California, by varying margins but nevertheless a consensus. Bovada currently lists Harris as a +150 favorite ($100 bet would win $150).

However, while Harris undoubtedly should be favored since she checks all of the boxes, some pundits have speculated because Biden specifically committed to picking “a black woman” as Supreme Court Justice — and simply “a woman” for Vice President — then that leaves the door open for him to not pick a black woman as his running mate.

President Barack Obama, whom Biden served under as Vice President for eight years (2009-2017), will likely play a significant role in who his former second-in-command picks as “Biden’s Biden.”

It would be “easy” to say Obama would favor Harris or another black woman but remember: Biden was picked not just because he was ideologically similar to the then-2008 Democratic nominee, but also because of Biden’s well-known “Middle-class Joe” reputation in the Midwest and Rust Belt of America, which in hindsight, gave Obama’s team the last vital piece to his historic victory twelve years ago.

The vetting process for the former Vice President is expected to wrap up sometime in July or August at the very latest, with a final decision shortly after.

Below are the current odds on the 2020 Democratic VP, and more candidates for Biden’s VP pick are available from Bovada on request.

May 20 — Odds courtesy of Bovada

*The first candidate to accept the nomination will be declared the winner.