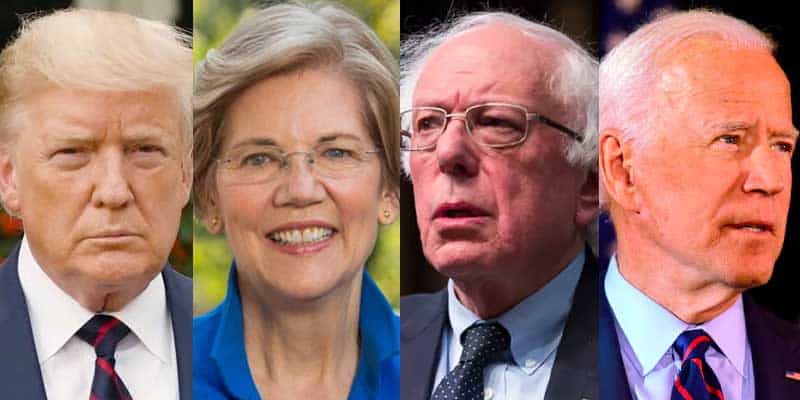 The latest battleground polls show President Donald Trump still has life in the 2020 Presidential Election despite his low approval ratings and the possibility that he is impeached during his first term.

According to new surveys conducted by The New York Times and Siena College, Trump is beating out the top three Democratic candidates in some of the country’s battleground states.

Battleground states are described as states that are most likely to play a huge role in deciding the winner of the POTUS election, which includes Michigan, Pennsylvania, Wisconsin, Florida, Arizona, and North Carolina.

The following polls pit Trump against the highest polling Democrats: former Vice President Joe Biden, Sen. Bernie Sanders, and Sen. Elizabeth Warren. As the following data will show, Biden could have the best shot to defeat Trump in 2020 via polling information.

The first table shows Trump’s chances with registered voters. The incumbent fares the best against Warren, outpolling her in Michigan, Florida, and North Carolina. Against Biden, Trump only takes North Carolina outright.

The second table shows Trump’s chances with likely voters. Trump does even worse against Biden when it comes to likely voters, but much better against Sanders and Warren.

Democratic strategist Hank Sheinkopf says Democrats should be troubled by these numbers.

“Any Democrat who looks at that data should be concerned. The blue-collar rift in this country hasn’t been healed in any way and Trump still commands tremendous loyalty.”

Trump lost the popular vote in 2016 to Hillary Clinton, but with key wins in Pennsylvania, Wisconsin, and Michigan, the electoral votes were enough to propel him into the Oval Office.

Based on the NYT/Siena polling numbers, that could happen again; especially if Trump takes on Warren as the Democratic nomination.

If the 2020 showdown went by the current political betting odds, it would actually be those two squaring off.