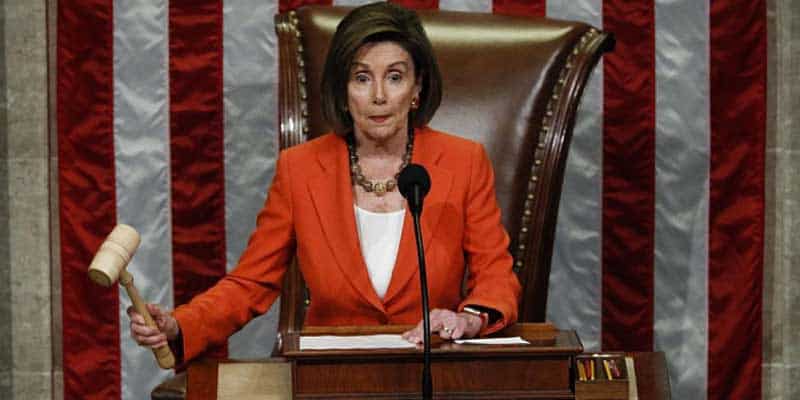 Odds Are Against Trump As House Votes To Formalize Impeachment Inquiry

Does today mark the true beginning of President Donald Trump’s worst nightmare? Will there be more skeletons to find or demons to excise during the impeachment process?

Or worse: could we run out of Halloween puns before the end of this story?

The House of Representatives voted on a resolution today formalizing the impeachment inquiry into Trump. The resolution outlines the inquiry, including authorization for the chairman of the House Intelligence Committee to conduct public hearings and for the President’s team to cross-examine the witnesses.

While every Republican present in the House voted “No” on the resolution, two Democrats broke with their party to vote with Republicans.

Reps. Jeff Van Drew from New Jersey and Collin Peterson from Minnesota both opted to vote nay in the formalization of the inquiry.

After all the votes were cast, Trump responded to the results on Twitter:

“The Greatest Witch Hunt In American History!” The President tweeted.

Trump campaign manager, Brad Parscale, elaborated on the ordeal in a statement.

“Every American can see this for what it is: an attempt to remove a duly-elected president for strictly political reasons by a strictly partisan, illegitimate process,” Parscale said. “Today’s vote merely proves that the entire impeachment process was a sham from the beginning and [House Speaker] Nancy Pelosi can’t legitimize it after the fact… Voters will punish Democrats who support this farce and President Trump will be easily re-elected.”

The vote is just the next step in the impeachment process for House Democrats. After launching the inquiry in late-September following a whistleblower’s complaint regarding Trump’s dealings with Ukraine, Pelosi announced a vote would be held to affirm the investigation.

As the odds sit right now, Trump’s chances of impeachment are favorable at -145, which converts to 59.18%.

Even with the impeachment odds set against him, Trump’s reelection odds are still in his favor. With +120 odds of winning the 2020 Presidential Election, Trump beats out Elizabeth Warren (+300) and Joe Biden (+600).