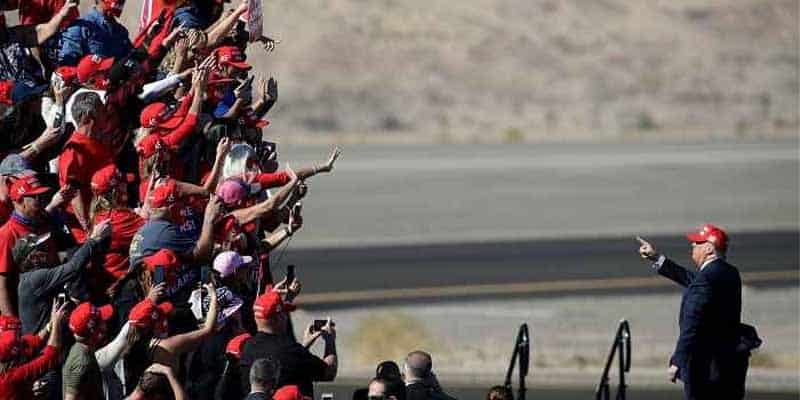 With less than 24 hours until election day, here’s what you need to know.

This is your last chance to wager on the high action presidential election odds.

The last day of campaigning for both candidates will be in the rust-belt trio states of Michigan, Pennsylvania, and Wisconsin. Both sportsbooks and polls favor Biden in all three battleground states. President Trump will make his final pitch in Wisconsin, while Biden homes in on Pennsylvania.

Amid rampant anxiety over election integrity and voter intimidation, governmental lawyers and nonprofit organizations in some states have implemented procedures for reporting intimidation and harassment at polling stations. Philadelphia set up a voter intimidation hotline with a team of attorneys on call.

But what exactly is the fuss around voter intimidation? Do voters donning American flags and shouting Trump driving around the polling station illegal? Well, according to Federal law, as long as it’s 200 feet away from the polling station, it’s okay. But where we see the problem is how the President encourages these types of interactions between voters.

Back in September, Trump reassured his electorate of the dangers of a rigged election, creating a public need to watch the polls closely. And just yesterday, the President applauded a caravan of his supporters surrounding a Biden campaign bus and driving it off the road.

For clarification, the President never explicitly stated to intimidate voters, and both parties train and employ poll watchers. These poll watchers are standardized parts of the election system. Nonetheless, animated supporters are taking matters into their own hands at polling stations.

In October, a pair of armed individuals stationed themselves at a polling station in Pinellas County, Florida. In Minnesota, state officials negotiated a deal to stop a private security company from sending former military personnel to the polls. The company stated their goal was to guard against left-wing activists.

Nobody wants to be targeted while performing their civic duty on November 3rd, neither from ANTIFA activists nor Proud Boy paraders. Know your voting rights. Poll monitors are certified and trained, and you may ask to see their certification if confronted. Unofficial or self-designated election monitors are not permitted inside the polling station.

Remember that you may request a provisional ballot if you encounter a problem at the polls with registration. Moreover, if you believe that you have been a victim of voter intimidation, national and local hotlines are available for you to report the incident.

Some Americans fear civic unrest on behalf of proponents of both political parties. The current normalization of city-wide protests and right-wing militia presence creates anxiety around the election.

One thing that concerns voters is the time it takes to count the votes, along with the legal questions of how states choose their electoral slates in a heavily delayed or contested count. Both parties prepare for legal battles. One bright side of this is that hopefully, Americans can trust the court systems enough to quell any civic entanglements.

And amid all the craziness, the lines on Donald Trump and Joe Biden shift again.

Due to the high action on the lines, we can infer that many bettors recently have been wagering on Donald Trump. Trump continues to move the bar away from Biden’s favor. Our recommended online sportsbooks will close betting on the Presidential election odds on November 3rd. This is your last chance for any last-minute wagers on who you think will take the Presidency tomorrow.