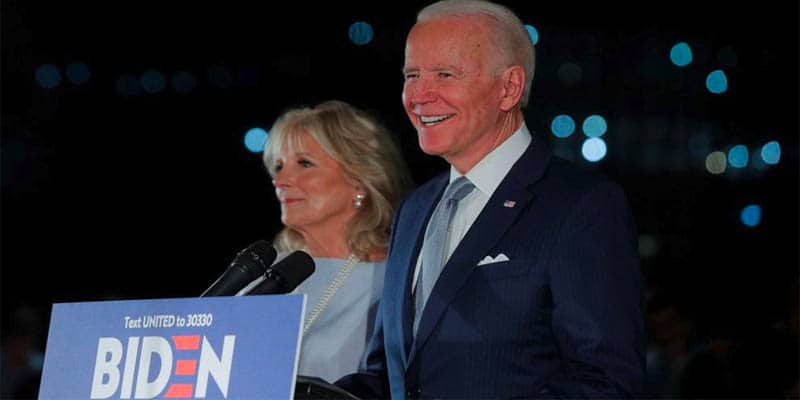 The race for the Democratic presidential nomination may not be over yet, but the latest 2020 election odds show that it’s one candidate’s race to lose at this point.

Former Vice President Joe Biden is the overwhelming favorite to receive the 1,991 delegates needed to secure the party’s nomination, according to the Democratic nominee odds at Bovada sportsbook following the Tuesday, March 10 primaries.

For Vermont Sen. Bernie Sanders, who was favored to be the nominee up until Super Tuesday, the window appears to be closing after last night’s voting results.

Joe Biden’s odds for the nomination are now listed at -2000, hitting a record high following the March 10 primaries, where he won Idaho, Michigan, Mississippi, and Missouri — all by comfortable margins.

On Wednesday,  $20 wager on Biden to win the nomination pays out $1 due to the 87% implied probability he eventually becomes the Democratic nominee. For comparison, the former VP’s odds were -900, where a $9 bet wins $1, before the March 10 primaries.

On the flip side, the situation is starting to look bleak for betting on Bernie Sanders’ odds of winning the nomination.

After winning the North Dakota caucuses and with Washington primary currently being too close to call — Sanders (32.7%) holds only a 0.2 lead over Biden (32.5%) in Washington with 67% of precincts reporting voting results at the time of writing, according to The New York Times — the Vermont senator’s chances of winning the Democratic nomination have hit an all-time low.

At +2000 odds, a $1 bet on Sanders would win $20 if he can make a comeback. Based on the political betting line from Bovada oddsmakers, there’s a roughly 4% that the Vermont senator can win the nomination at this point in the race.

The current delegate count shows Biden (863) leading Sanders (710) by a comfortable margin after the March 10 primaries, with 57 delegates still to be awarded from yesterday’s contest.

Biden is projected to win nearly every primary state that hasn’t voted yet, but it appears Sanders’ best chance at making a rally would come from what may be the final Democratic debate on Sunday, March 15.

With only Biden and Sanders taking the stage, the Vermont senator could potentially mop the floor with the former VP and come away as the clear choice to be Democrats’ best chance to beat President Donald Trump in the general election.

It’s a long shot, but at this point in the race, an overwhelmingly strong debate performance is possibly Sanders’ only shot at winning the nomination.

Joe Biden’s chances are slowly creeping up on Donald Trump when examining the updated odds to win the White House following the primary contests on March 10.

However, his current 52% implied probability is a significant drop from the all-time high of -180 odds, 59% chance, he held roughly a month ago.

As the likely Democratic nominee, Biden currently is posted at +110 odds to win the general election, meaning a $1 bet wins $1.10. The oddsmakers currently give him a 45% chance to beat Trump this fall.