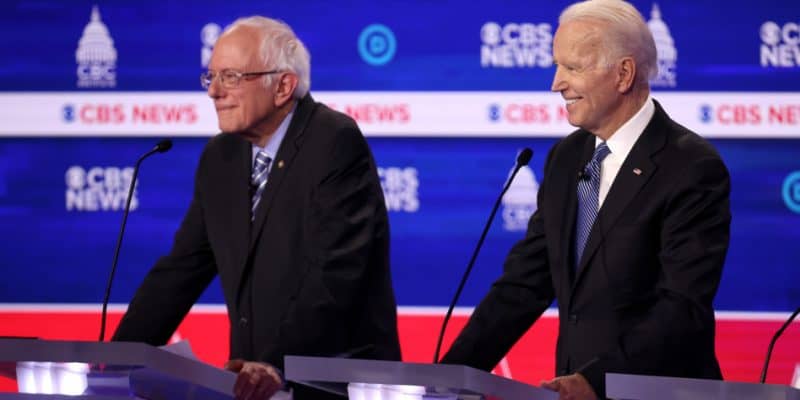 Biden-Sanders Debate Odds: Beware The Ides Of March And Coronavirus

It’s Joe Biden vs. Bernie Sanders this Sunday in what’s sure to be a Democratic presidential debate for history books as the United States continues to grapple with the coronavirus pandemic.

And according to the history books, it’s also March 15—the assassination of Julius Caesar on the “Ides of March” in 44 BC, which may or may not be a coincidental sign of what to expect during the Biden-Sanders showdown.

By how much the 2020 presidential election odds are affected and whether Sanders is stabbed in the back by Biden’s moderate boomer-majority coalition on the Ides of March is to be determined (Et tu, Warren?).

The Democratic Party establishment quickly rallied around Biden after his big win in South Carolina. This catapulted the former Vice President to a dominant Super Tuesday showing, allowing him to regain his status as the favorite for the nomination.

The current delegate count shows Biden holding an 860-706 delegate lead over Sanders after Super Tuesday 2. A total of 577 delegates are up for grabs on Tuesday, March 17, with Arizona, Florida, Illinois, and Ohio holding primaries.

Despite nearly every major sporting event, music concert, business convention, and other large gatherings being postponed, the DNC remains content on holding the St. Patrick’s Day primaries at the time of writing.

Needless to say, the millions of voters heading the polls will need more than the Luck of the Irish to avoid spreading coronavirus if the primaries take place on Tuesday.

Before diving into the debate and the prop bets available, let’s take a quick look at the 2020 Democratic presidential nominee odds at BetOnline sportsbook, which shows Biden as the clear favorite to reach the 1,991 delegates needed to secure the nomination.

Is Biden a safe bet?

While no bet is “safe,” Biden’s odds of winning the nomination indicate he’s very likely to become the Democratic candidate to face off against President Donald Trump in the general election.

Sanders’ nominee odds have seen a significant decline over the past two weeks. With +1000 (10/1) odds, where a $1 wager wins $10 if you believe in miracles, the Vermont senator currently has about a 9% chance to mount a delegate comeback (with juice: 9.09%).

Hillary Clinton’s odds are still listed, and even though many of the cable news political pundits may be salivating while reading this, it’s highly unlikely the 2016 runner-up enters the race.

For reference, the current FiveThirtyEight forecast predicts Biden will win the 2020 Democratic Primary, with their model giving the former VP a greater than 99% chance.

To prevent further spread of the coronavirus, the eleventh 2020 Democratic presidential primary debate was moved from Arizona to Washington, D.C., and there will be no studio audience in attendance—which how it should be even when there isn’t an angel of death for the elderly hiding in people’s throats.

The first one-on-one debate of the primary features Joe Biden and Bernie Sanders as the two remaining contenders for the Democratic Party presidential nomination, and it’ll be interesting to see how the debate plays out without paid surrogates and the occasional protestors interrupting a discussion of the biggest challenges facing America.

To help with betting and to get some sort of reference for what might happen Sunday night, here’s the first 1960 presidential debate between Democrat John F. Kennedy and Republican Richard Nixon. The Kennedy-Nixon debate was the first-ever televised presidential debate and did not have a live audience. JFK was declared the winner by most publications and would later defeat Nixon in the 1960 general election.

Of the topics that will be on the docket for the Biden-Sanders debate, the coronavirus will no doubt be the focus of most discussion after the World Health Organization called COVID-19 a global pandemic on Wednesday and President Trump declared a national emergency on Friday.

According to the COVID-19 map from Johns Hopkins, the coronavirus has killed 5,829 people worldwide, and there are currently 156,102 total confirmed cases, at the time of writing. With testing in the United States finally ramping up at the state level, so is the number of confirmed cases and deaths, which currently sits at 2,726 cases and 54 deaths—up from 1,323 cases and 38 deaths on March 12 when Trump addressed the nation.

Univision’s Jorge Ramos was going to be one of the moderators for the Biden-Sanders debate, but he chose not to attend after potentially being exposed to the coronavirus. CNN’s Dana Bash and Jake Tapper and Univision’s Ilia Calderón will moderate the two-hour debate taking place at the CNN Washington Bureau from 8 to 10 p.m. ET on Sunday, March 15.

This may be Sanders’ last opportunity to make the case for both his 2020 campaign and Medicare For All—the Vermont senator’s signature policy, where the “damn bill” guarantees health care as a human right for all people by eliminating health insurance in favor of a government-funded expansion.

The coronavirus has highlighted major faults with our broken healthcare system, which includes charging people thousands of dollars for treatment and the over-reliance on goods and medicine made in China, where COVID-19 originated.

On substance, Sanders holds a massive edge over Biden because even though the Affordable Care Act (Obamacare) expanded coverage to tens of millions of Americans, the current system is not prepared to handle the coronavirus pandemic and our “great” private insurance companies continue to try and extort Americans at every turn.

Coronavirus death toll projections have changed based on the state and federal response and public awareness, but one health expert recently told The New York Times that the most conservative “best guess” is 96 million people infected and 480,000 deaths in the United States.

The Trump administration’s position on health care and how the President has dealt with the initial outbreak will surely come under fire during Sunday’s debate. Among the most egregious errors, Trump has called the coronavirus a “new hoax” from Democrats at a “Keep America Great” campaign rally and frequently downplayed the viral disease on Twitter.

The Fake News Media and their partner, the Democrat Party, is doing everything within its semi-considerable power (it used to be greater!) to inflame the CoronaVirus situation, far beyond what the facts would warrant. Surgeon General, “The risk is low to the average American.”

And in another case of hindsight is the year 2020, Trump’s firing of the U.S. pandemic response team in 2018 to cut costs is less than ideal—to put as lightly as possible—given the current situation.

At the end of the day, despite the majority of Democrats favoring Medicare For All in 20 consecutive state primary exit polls, voters continue to favor Biden because of his supposed “electability” and “ability to beat Trump.”

Given how we may be in for several new additions to Biden’s best gaffes during the debate and how Democratic voters—so far—don’t appear to care, there may not be much hope for Sanders to make a comeback unless Americans start voting on substance instead of pageantry.

Nevertheless, below you’ll find all the Biden-Sanders debate prop bets for Sunday’s head-to-head, which include everything mentioned so far in addition to the recent decline in the stock market. Considering the bleak look of the sports world at the moment, the online sportsbooks will likely make more propositions available, but for now, here’s everything you can bet on for the March 15 Democratic debate.

Who will win the debate?

*According to CNN’s Chris Cillizza. If both are named as a “winner” or “loser” then all wagers are refunded.

Over/Under: Total times “coronavirus” will be said by candidates

Over/Under: Total times “Trump” will be said by candidates

Over/Under: Total times “stock market” will be said by candidates

Over/Under: Total times will “time is up” will be said by moderators?

How Many Times Will Biden Mention “Obama” During The Debate?

Must say “Obama” to count. “Obamacare” will not count towards the final tally.

How Many Times Will Donald Trump Be Mentioned During The Debate?

Must say “Trump”, “Donald Trump” or “President Trump” to count.

How Many Times Will Donald Trump Tweet During The Debate?

How Many Times Will The Word “Pandemic” Be Mentioned During The Debate?

Must say “Pandemic” to count.

Which Candidate Will Speak The Most During The Debate?

Which Of Bernie Sanders’ Own Debate Topics Will He Try To Ask Joe Biden First?

Will Donald Trump Tweet Out “Crazy Bernie” During The Debate?

Will Donald Trump Tweet Out “Sleepy Joe” During The Debate?

Will Either Candidate Mention “Universal Basic Income” During The Debate?

Must mention either “UBI” or “Universal Basic Income” for YES to be graded as a win. Bookmanager’s decision is final.

How Many Times Will Donald Trump Tweet On The 16th Of March?

Only Tweets & Replies originating from @RealDonaldTrump between 8-10PM EST will have action. Retweets will not count.