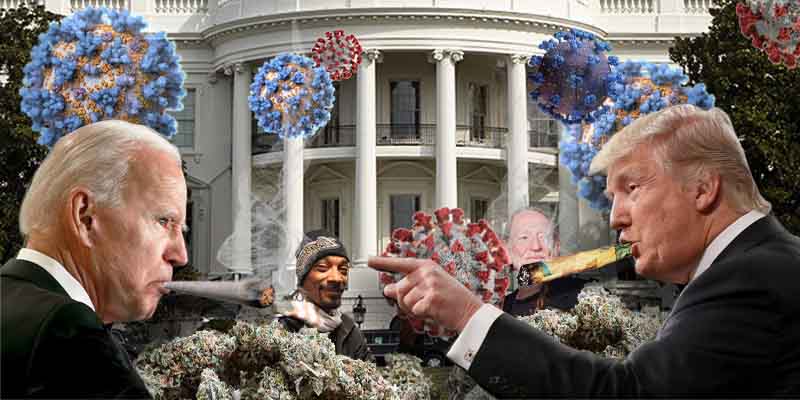 On April 20, 2020, American voters and bettors all across the nation remain in quarantine from the coronavirus pandemic, and millions are legally celebrating the national holiday for cannabis culture.

Donald Trump has a slight edge over Joe Biden in the latest odds to win the 2020 US Presidential Election. However, the chances of federal marijuana reform or the end of the “War on Drugs” are both roughly “slim to none” in the upcoming four years, regardless of who wins the White House.

Trump -125 indicates the Republican incumbent has a 55% implied probability, based on the converted betting line from Bovada’s political oddsmakers.

A $125 wager on Trump to win the 2020 election, for example, would payout $100 if the perceived favorite wins four more years in the White House.

The 2020 election betting odds for Joe Biden winning the presidency continue to be pinned as the underdog at Bovada.

Biden +125 indicates the former Vice President under President Barack Obama has an approximately 44% chance to win the 2020 general election.

Since Biden is perceived to be less likely to beat Trump, a $100 bet on the ex-VP would return the initial wager and pay out $125 in winnings if he avenges the 2016 loss for the Democratic Party on Election Day 2020.

The combined odds for other potential candidates continue to hold less than a 1% total chance since nothing indicates a legitimate last-second change or third-party challenge in the eyes of online sportsbooks and prediction betting markets in Las Vegas and around the globe.

However, the American workers, pickers, grinners, lovers, sinners, jokers, smokers, and midnight tokers are all favored to walk away disappointed — if they even show up to vote for either the Republican or Democratic presidential candidate.

Maybe the women favored to be Biden’s VP pick will bring nationwide marijuana reform to the table in the future, but whoever becomes his running mate “won’t disagree with him on a single issue” — meaning Democrat’s Mary Jane is more likely to step on your toes in upcoming elections’ “last dance.”

If you are in favor of voting or betting on either 2020 candidate who carries strong archaic anti-marijuana stances, then here are some not-so-fun facts for you to toke on as the United States federal and state justice systems continue to ruin the lives of millions of people throughout previous and current administrations.

But wait, we saved the best not-so-fun fact about marijuana and the US justice system for last.

Here’s a breakdown of the potential economic flip if marijuana and potentially other drugs were legalized and taxed, or if either were at least decriminalized today in America.

Taxes could be used to jumpstart Kindergarten through 12th-grade education programs and fund scholarships for high schoolers to go to trade school, community college, and university — giving America’s youth both:

As recently noted by Market Realist, all bets are off in the post-coronavirus pandemic version of America since there’s a chance that Donald Trump or Joe Biden may come under enough pressure to change their stance — with the former VP seen as more likely due to every 2020 Democratic presidential candidate openly supporting marijuana and criminal justice reform during the primary.

Trump frequently touts his administration’s economic accomplishments for Black America and minorities, but he appears gung-ho on continuing to fight the losing war against marijuana and other drugs.

As a result, Biden is more likely of the two presidential candidates to be the first to change his stance on marijuana and drug criminal justice reform since the Democratic Party’s electorate is more vocally outspoken about the issue as a whole.

So far, the former VP has been silent on the issue. Considering party unity is something Biden has pitched publicly within the last week, relaxing his “Freeze it and drop the drugs, buster!” crime stance seems plausible, but only if Joe Cool is as good as his word.

Together, we will defeat Donald Trump. pic.twitter.com/2nF0qVGGaH

As of April 20, both Trump and Biden — the two most likely candidates to be elected President in 2020 — do not support legalizing marijuana despite 67% of Americans supporting the personal use of weed, according to a 2019 Pew Research Center survey.

Every 2020 Democrat for President championed some form of marijuana reform during the primary except for Biden, which is alarming considering how black and minority voters are the most likely to be negatively impacted by America’s decades-long losing battle in the war on drugs.

Everything ranging from Day One nationwide decriminalization of marijuana from electing Bernie Sanders to the end of drug incarcerations and pardons for all nonviolent marijuana offenders on April 20, 2021, was proposed during the primary.

At least the last one would have made sure all weed convicts received a high-five from Andrew Yang on April 20, 2021 — who has been inspired by the ongoing results of drug decriminalization policy rollouts in Portugal and other parts of the world.

According to Bovada’s odds on a newly-released prop bet for the 2020 presidential election, the online sportsbook currently favors Biden, the all-but-certain Democratic nominee, to win more of the 270 electoral votes needed to win the presidency on November 3.

The political proposition — which is the nationwide electoral vote margin of victory for the 2020 election — is similar to a point spread in sports betting and requires bettors to pick the most likely outcome of Trump vs. Biden.

At +800 and each scenario with an 11.11% implied probability, oddsmakers predict Biden, the Democratic Party presidential nominee, is favored to win between 30-59 and 60-99 more electoral votes than Trump, the Republican Party incumbent, on Election Night 2020.

However, the Electoral College margin of victory project is razor-thin since Bovada predicts Trump to win by the same number of electoral votes is listed at +900, which gives both margins a 10% chance each.

Since a $100 bet wins at least $800 for Biden and $900 for Trump, regardless of any outcome, the margin of victory for the 2020 Presidential Election electoral college is sure to pay out a lucrative return on investment to anyone who can predict who wins and by how much.

As for where the margin lands, bettors may want to wait until the candidates attempt to sell their vision of marijuana and drug reform as well as what America looks like if COVID-19 is still spreading this fall.

Unfortunately, the odds for both are currently cloudy, at best. But even though Biden or Trump likely won’t be puff puff passing any legislation on marijuana in the near future, it wouldn’t be shocking to see one grab the issue and an announce a blunt policy proposal to end a prohibition that has annually received majority support across all polls taken over the past decade.

For now, though, here’s where Bovada’s oddsmakers currently project the electoral vote count landing for the 2020 presidential election, as of April 20 — #420blazeit.

Last but not reaf: An encore dose of “My Medicine” by Snoop Dogg and Willie Nelson — America’s two highest Patriot potheads.