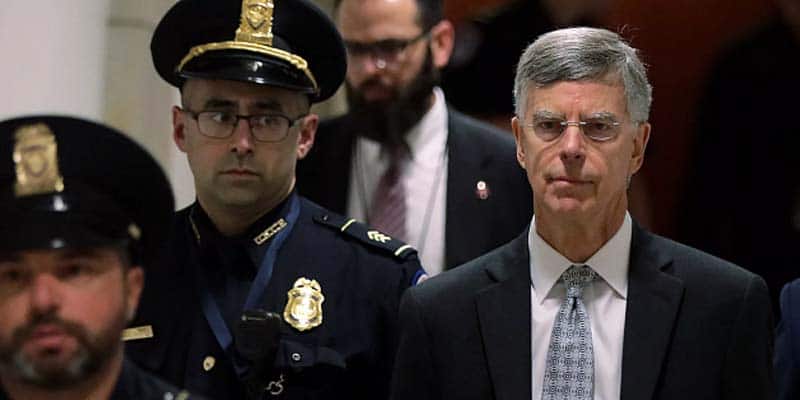 Yesterday’s date, October 22, 2019, could go down in history books as the day the President Donald Trump’s administration officially started to fall.

Of course, there has been an ongoing impeachment inquiry surrounding Trump’s alleged quid pro quo with Ukraine for a month now. But it may be the testimony of Bill Taylor that starts a real snowball effect in Washington, DC.

As the chargé d’affaires for Ukraine, Taylor was based out of the U.S. Embassy in Kyiv, Ukraine. In the center of the controversy, both politically and geographically, Taylor delivered a testimony that committee members called “damning” for the President.

Taylor began his nine-hour deposition with a 15-page opening statement that described an effort made by the United States to urge Ukrainian President Volodymyr Zelensky to investigate Hunter Biden and any Ukrainian interference in the 2016 U.S. election.

After the closed-door testimony concluded, the representatives present voiced their opinions.

“It was the most detailed and specific testimony we have heard in these many depositions about the holding up of military aid,” Himes added.

Rep. Andy Levin, a Democrat from Michigan, said the testimony was his “most disturbing day in Congress so far.”

However, not all Congressmembers agree that Taylor’s testimony advances the idea that Trump is guilty of withholding military aid from Ukraine.

“I don’t see anything that has advanced the quid pro quo or the promise of anything with foreign aid,” House Republican Mark Meadows (R-NC) said. “There’s no one who can be intellectually honest and come out of that deposition and suggest otherwise.”

Throughout the inquiry, Trump’s political odds have fluctuated in and out of his favor. For the past week, the impeachment odds have been against Trump.

Currently, the odds favor Trump’s first-term impeachment at -180 chances and +135 chances he beats any allegations.