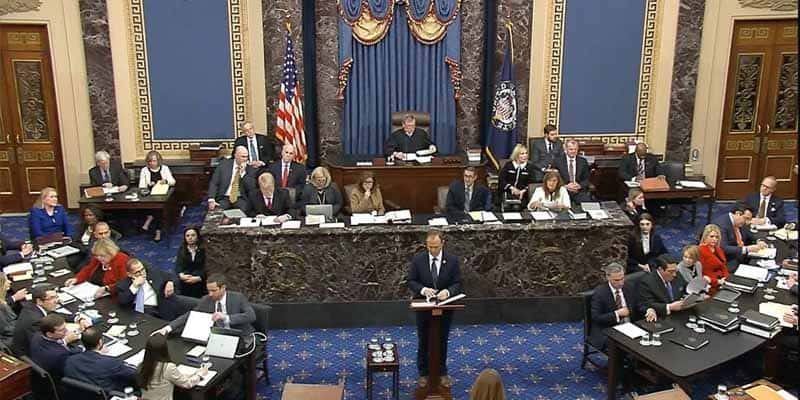 Bored Of The Trump Impeachment Trial? Try Betting On It Instead.

The historic impeachment trial of President Donald Trump began in the U.S. Senate earlier this week, but so far, the media coverage surrounding the proceedings has been one word: Boring.

Normally placing political bets on something that’s very likely outcome could make things interesting, but it’s not whether even wagering on the 2020 election or this trial could keep even the most dedicated handicapper awake.

Part of the boredom is due to the fact that after Trump’s impeachment odds paid out back in December, the chances of the President getting convicted opened as a “slim to none” chance and have only gotten worse since then.

When converting to a true probability, the oddsmakers at Bookmaker believe that there’s a 96.88% chance Trump remains in office after the impeachment trial is over. For comparison, they believe there’s a 3.12% chance he’ll be removed from office.

It’s very rare you’ll see odds that paint a clear picture of the “writing on the wall,” but an almost 97% chance is about as safe a bet as you can place, which is why it requires a lofty 8000-to-100 investment. The lowest amount you win would be $1—from an $80 wager.

And you would think at least the people tasked with deciding Trump’s fate would have a vested interest in what’s happening in the upper chamber of Congress.

And you’d be wrong too.

Despite the strict rules stating there would be no electronic devices, talking while testimonies, sleeping, or leaving early—both Republicans and Democratic senators have already broken pretty much all of them as boredom consumes the trial.

Perhaps the most enlightening comment on the drama-less drama came from 2020 Democratic presidential candidate Andrew Yang when he tweeted an accurate summation of the impeachment trial so far:

This impeachment coverage is riveting.

There are some interesting prop bets for the impeachment trial, including the over/under on how many Senators vote to convict or acquit and whether certain individuals are called to testify.

But perhaps the most uninteresting part of Trump’s impeachment trial is that there’s not a single one of the prop below that legitimately warrants betting on the underdog.

Regardless of what’s said and done until the proceedings conclude, all you need to know is this: All of the impeachment trial bets are chalk because Trump is gonna walk.

The end result from all of this? Nothing. Well, except Trump’s reelection betting odds will probably reach a new all-time high.

Will The Senate Remove Trump From Office Before May 15, 2020?

How Many Senators Will Vote To Remove Trump From Office?

Will The Final Vote Be Exactly 53 To Dismiss The Case Or Acquit Trump?

Will The Senate Call Any Witnesses During The Impeachment Trial?

Will Lev Parnas Testify During The Impeachment Trial?

Will Nick Mulvaney Testify During The Impeachment Trial?

Will Rudy Guiliani Testify During The Impeachment Trial?