A Day At The Polls – One Volunteer’s Perspective

Tuesday March 15th, 2016 was my first experience as a volunteer for any type of political campaign. To be honest, for the last two presidential elections I’ve had to hold my nose to vote for establishment candidates that were shoved down our throats by the ‘good old boys’ in the GOP. I wasn’t really voting FOR the republican candidate but rather saw my vote as one favoring the lesser of two evils.

The 2016 election is the first presidential election during my lifetime where I’ve actually been excited about one of the candidates, which drove my decision to try to get involved as more than just a voter at the polls.

Due to a hearing disability, making calls was not a good fit for me, so I spent voting day at the top Republican polling precinct in my area. Since Florida’s primary is closed, I chose to try to influence the one group that could vote for or against the candidate I am supporting.

Early voting in Florida did reduce the number of voters participating on the day of the primary. All in all, I found most people to be very civil and friendly. Among the voters that I engaged in conversation, quite a few of them had difficulty articulating why they were supporting their candidate of choice.

They were surprisingly uninformed regarding specific positions their favorite candidates held on key issues. I found this to be consistently true among Trump voters, and somewhat present for Rubio and Kasich voters as well.

The voters who seemed very sure of why they were supporting their candidate were the young Sanders followers. They all wanted free college and they are sure Sanders will get it for them. When I asked them who would pay for this free college, or how colleges would survive giving everyone a free education, they just said ‘the government’ will pay for it.

Clearly, they have no understanding of the fact that ‘the government’ only has OUR money.  The government doesn’t produce its own revenue; they take it from the taxpayers. They are such a young crowd that it is likely many of them have not even felt the sting of income taxes yet and have no concept of how a 90% tax rate would affect their lives. There was literally no critical thinking involved here, they just heard the phrase ‘free stuff’ and were sold.

Rubio, Kasich and Cruz supporters had some good catch phrases to repeat and while you could tell that some of them just drew their ideas from mainstream media reports, they were fairly applicable in some cases. I did not meet any Clinton supporters, but I did meet quite a few Trump voters, who also were not very articulate regarding any legitimate reasons to vote for their candidate of choice.

They are just fed up with Washington DC and see him as relief from what the Washington insiders have put them through. The specifics didn’t really matter to them, so it looks like he will not be required to explain just ‘how’ he will make America great again, not even to his followers. 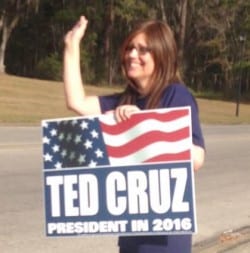 As I said, most of the people I met in person were very nice and hospitable, and though some were argumentative, they were not disrespectful towards me nor I to them. However, the people in cars who drove past me as I was sign waving for the Cruz campaign were a different story. Just to be clear, sign waving is simply holding a sign, smiling and waving – nothing more.

I did get a lot of honks, thumbs up and ‘Choose Cruz’ shouted out, however, I also got the finger, some vulgar language and some very rude comments shouted at me. I checked for bumper stickers on these cars to see which camp they were a part of, and nearly all of the noticeably angry and hateful responses came from those with Trump stickers on their cars.

All I was doing was holding a sign, smiling and waving, and this elicited some strong reactions of anger and hate from some people. Most drivers who were clearly not in agreement with my choice for president responded with a firm ‘not me’ by shaking their head no or giving me a thumb down. They got their message across without being hateful about it or making it a personal attack against me.

However, there really is a group of Trump supporters who are so emotionally charged that they say or do whatever they want towards those who disagree with them, and they don’t mind doing it in anger. I have to admit, this is the example that their fearless leader has given them. Rubio and Sanders supporters had no problem peacefully disagreeing with me, only Trump supporters chose to get down in the gutter when they reacted to my support of Ted Cruz. Many of them made it personal and were very angry in their responses.

What I Took Away From My Day at the Polls

A huge number of voters do not even know why they are voting for their candidates, and have neglected to analyze the substance of what the candidates are saying in their messages. Once again, we are swarmed with low information voters who believe anything they hear on TV and can be tickled and entertained to get their vote. It was not a reassuring experience that allowed me to willingly place my faith in the American people to select a candidate that will really be good for the future of our nation.

I walked away from that day very discouraged about the effectiveness of our media to control information flow in such a way that uninformed and misinformed voters make up the majority of constituents. This is despite the fact that we are living in the information age and technology literally places everything at our fingertips that we need for accessing the truth. People are not interested in the truth. The results of Super Tuesday II proved this. We are in real trouble as a nation, and too few people are concerned about this.

I am grateful for the experience I had as a volunteer with the Cruz campaign. It opened my eyes to some of the realities of democracy I had not considered before, and how freedom has its cost in more ways than one. This primary season has reflected some dramatic changes in the US political landscape, and some of these changes are downright frightening.

Never before in history would someone being investigated by the FBI or a reality show entertainer who fraudulently swindled money away from thousands of students through a fake university be well received and glorified as a presidential candidate. The future is uncertain, and the next few months will determine what road America travels.

Will I Be Betting on the 2016 Presidential Election?

Though I may be concerned about how this election is playing out, the one area where voters are coming through for me is in betting on politics. I have done pretty well so far with my bets on the individual state primaries because while I may not like how American’s are voting, the polls and betting odds are accurately reflecting the current tone and mood of Americans closely enough to give me some pretty sure bets, and a few closer, riskier moments as well. This definitely helps keep things exciting in one respect.

So as I become discouraged over the path our nation may take in November, in the meantime I can at least have some fun and make a little money betting on the 2016 Presidential election. Yes, gambling entertainment has turned out to be my silver lining.