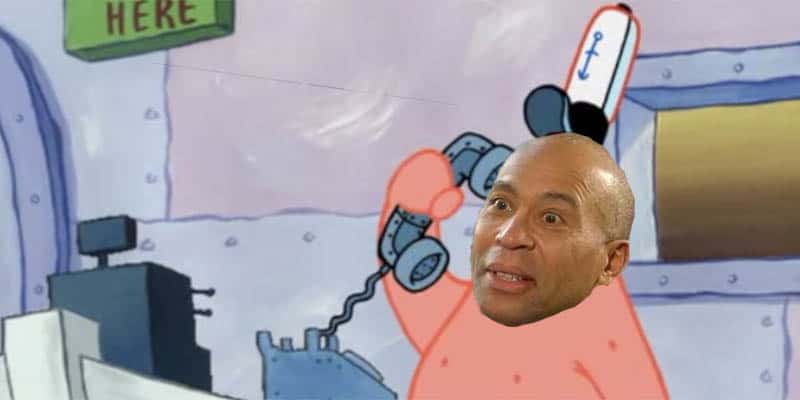 Another Day, Another Dem: Deval Patrick, With No Chance To Beat Trump, Mulls 2020 Run

Another day, another Democrat wants to join the 2020 race.

Here’s how I like to imagine the conversation between Democrat mega-donors and former Massachusetts Gov. Deval Patrick went down last week:

Democratic establishment: “Is this a Democratic candidate who will vote for whatever we want and legitimately challenge odds-on favorite Donald Trump in the 2020 Presidential Election?”

Despite having several Democrats with a good chance to beat Trump, the party elites are stopping at nothing—even resorting to placing an imaginary phone call to the Krusty Krab in my mind—to find someone, ANYONE, to play ball with them like so many have in the past.

And if recent reports about Patrick are correct, then he’ll become the latest Democrat to make a last-minute entry in the ever-growing field of candidates hoping to take back the White House next year.

Patrick was a potential candidate earlier in the process, but ruled out running for president in 2020 late last year, stating in a Facebook post that the “cruelty of our elections process would ultimately splash back on people whom Diane and I love, but who hadn’t signed up for the journey, was more than I could ask.”

But love for the family be damned when Wall Street’s big-money Democratic donors come knocking, I suppose.

According to Politico, he checks all the boxes for Democrat elite: “The donors, many with ties to Wall Street, see Patrick as the perfect candidate: a dynamic, African-American progressive governor who got elected in a heavily white state and who also has good ties to the business community thanks to his time in Bain Capital, the firm founded by another former Massachusetts governor and former presidential candidate, Mitt Romney.”

An anonymous source close to the situation went on to say: “This is coming from Wall Street. They’re terrified of Warren. And these guys would help Biden. But they’ve been in a room with him up close, and they have doubts. Deval wants this. He regrets not having done it. His wife was ill. But since then, she has gotten better. But the field has gotten worse.”

That last part is interesting because part of the blame for a “worse” field can be attributed to the DNC for continually botching the primary process and creating the possibility of the election being bought by billionaires. Look no further than Michael Bloomberg possibly joining the race for evidence of this.

Patrick doesn’t have any odds to win the 2020 Presidential Election, and with less than three months to go until the first votes are cast Iowa, he essentially has no chance of becoming the nominee or beating Trump—which is supposedly his whole reason for running.

In other words: Sorry, Patrick. You’re a day late, and several Democrats short of having even a remote chance of sitting in the Oval Office this time around.