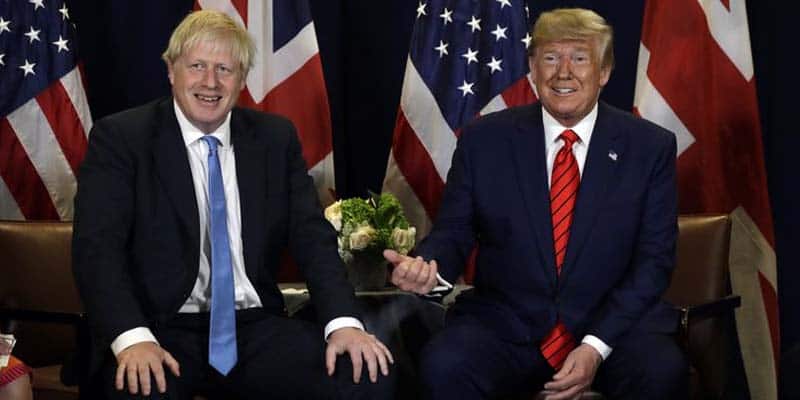 With the United States having a whistleblower alleging a possible coverup from the White House, and with arguments nastily heating up over the United Kingdom’s “Brexit” from European Union—it’s safe to say politics on planet Earth is getting a little out of hand.

And two world leaders—U.S. President Donald Trump and U.K. Prime Minister Boris Johnson—are at the center of it all.

But hey, at least MyBookie is having some fun with both Trump and Johnson. With the opposition from countries talking of booting them out of their positions of power, the oddsmakers have a prop bet available on who leaves office first.

Who Will Be Out Of Office First?

The current Prime Minister is likely favored because of the recent news that saw Johnson fail to break a deadlock via early national election and illegally attempt to ask Queen Elizabeth to prorogue (a fancy way of saying “discontinue or suspend a session”) Parliament back in August.

Johnson has since suspended Parliament until October 14—a fortnight from the Brexit deadline on October 31—but the eleven judges on the U.K. Supreme Court recently ruled that his decision to do so was “unlawful.”

Many members of Parliament are now calling for Johnson—who “profoundly disagreed” with the court’s decision—to resign from his PM position and many U.K. sportsbooks believe he’ll be out of office before the calendar rolls over to 2020.

Across the Atlantic, with President Trump’s odds of winning reelection next year holding steady, oddsmakers are giving him +250 odds, 28.57% chance, to remain in office longer than Johnson.

This prop bet also comes after the Democrat-controlled U.S. House of Representatives launched an impeachment inquiry yesterday and following the document of the whistleblower complaint releasing today.

The whistleblower alleges the President both withheld military aid from Ukraine to get dirt on former Vice President Joe Biden—one of the Democrats with the best odds to face Trump—and his son while White House officials attempted to cover up his actions.

With the whistleblower expected to testify soon, political betting sites still believe the odds of a Trump impeachment are low—MyBookie has “Yes” listed at +300 and “No” favored at -500 odds.

Between Johnson’s Brexit blunder and Trump’s whistleblower, it’s hard to say which is more likely to happen considering both country’s leaders are under intense pressure and scrutiny at the moment.

After all, the odds of both leaving office appear to increase with each passing day.

But if the oddsmakers are right, then it looks like the political world will be eating crumpets for breakfast before having a slice of apple pie for dessert.