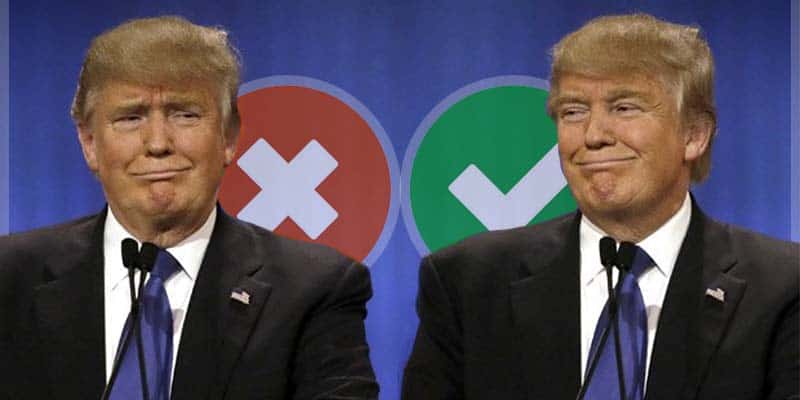 Trump vs. the Field: Will ‘Not Donald Trump’ be the Republican Nominee in 2020?

To Trump or not to Trump, that is the bet.

Republican Nominee for the 2020 Election

As President Trump’s impeachment proceedings loom, the possibility that he is removed from office could become a reality.

If the vote were up to Americans, Trump’s impeachment would be imminent. According to the latest CBS News/YouGov poll, 55% of US citizens favor the impeachment investigation.

What’s more, CBS News contributor Jeff Flake, a former Republican senator from Arizona, claimed that 35 Republicans would vote to impeach Trump if the votes were private.

Spearheaded by Democrats following the release of a whistleblower’s complaint, Trump is lashing out at his political rivals during the impeachment inquiry, primarily through social media.

In the last 24 hours, President Trump has electrified Twitter with his thoughts, including Pastor Robert Jeffress’s Civil War quote, accusing security officials of espionage, and calling for Rep. Adam Schiff’s arrest for treason.

….If the Democrats are successful in removing the President from office (which they will never be), it will cause a Civil War like fracture in this Nation from which our Country will never heal.” Pastor Robert Jeffress, @FoxNews

….In addition, I want to meet not only my accuser, who presented SECOND & THIRD HAND INFORMATION, but also the person who illegally gave this information, which was largely incorrect, to the “Whistleblower.” Was this person SPYING on the U.S. President? Big Consequences!

Rep. Adam Schiff illegally made up a FAKE & terrible statement, pretended it to be mine as the most important part of my call to the Ukrainian President, and read it aloud to Congress and the American people. It bore NO relationship to what I said on the call. Arrest for Treason?

The complaint stems from a call between Trump and Ukrainian President Volodymyr Zelensky in which the whistleblower claims Trump would withhold military aid from Ukraine unless Zewlensky investigated Joe and Hunter Biden.

In an attempt to prove his innocence and curb the presidential impeachment odds, Trump released the phone call transcripts last week. But as of today, Zeledensky has refused to release his office’s share of the call.

“It seems to me that we are at a high level when we do not need to do such a thing. There are some things and nuances that I think should not go public,” the Ukrainian President said.

In conjunction with the Republican nomination bet, “Not Donald Trump” also tops the 2020 presidential election category with -150 odds. Trump ‘s 2020 odds are at +120 on this bet, followed by Elizabeth Warren at +225.