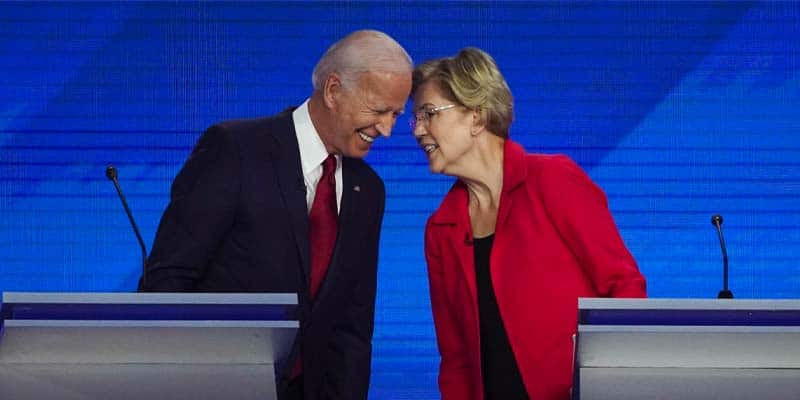 A recent survey of the Democratic electorate hinted at who Joe Biden will select as his Vice Presidential running mate.

And although all 2020 election betting sites disagree with the results, it’s worth noting that even “two cents” can offer a substantial return on investment.

But only if you have “a plan for that.”

According to the CBS News poll, Senator Elizabeth Warren of Massachusetts topped the list with most registered Democratic voters wanting Biden to consider her and received the most “first choice” responses by a significant margin.

When asked who Biden should consider for his running mate, 71% said Warren should be considered for VP on the ticket. Senator Kamala Harris of California was next with 59% saying she should be on the prohibitive nominee’s list of favorites.

Warren also leads Harris, and the rest of the women-led field, when questioned on who Biden should select as running mate. 36% of the Democratic electorate said Warren is their first choice — nearly double the 19% who said they favor Harris.

Odds on Biden’s VP pick have consistently favored Harris by slight margins following his pledge to select a woman as his running mate during the head-to-head primary debate with Senator Bernie Sanders of Vermont.

Sportsbooks and prediction markets have recently begun to favor Harris’ VP chances outright. Still, this poll deserves close inspection from political gamblers before they place a wager — even if polls, like pundits, must always be taken “with a grain of salt.”

Per Bovada Sportsbook, Harris +175 means a $100 bet will win $175 if she is Biden’s VP. Since her odds offer the lowest potential winnings, Harris is perceived to be a clear favorite by oddsmakers.

Even though Harris’ Democratic VP chances mirror the opening line post-Biden vs. Bernie debate, her probability has increased due to the combined decrease in value for the other potential running mates.

Senator Amy Klobuchar of Minnesota, for example, remains second most-likely but has fallen from +200 to +400 over the past couple of months.

Warren’s odds to be Democratic VP over the same time have gone from +1500 to +550 — the most significant swing in the value of any candidate on the Democratic running mate board.

A $100 wager on Warren now wins $550, compared to $1500 two months ago. Given the widespread media attention of this poll specifically, there’s a strong chance Warren’s value will continue to decrease since the majority of the betting public will view her as more likely to get the nod from Biden.

It’s also reasonable to assume Biden won’t make his decision official until July or August. But his campaign desperately needs a spark so an early VP announcement wouldn’t be too surprising.

Lastly: President Barack Obama, the then-presumptive Democratic nominee, officially selected Joe Biden as his Vice President on August 23, 2008 — both a potential over/under political prop and reasonable timeline for when one of the following women will be selected as his Democratic Veep.

May 11 — Odds courtesy of Bovada