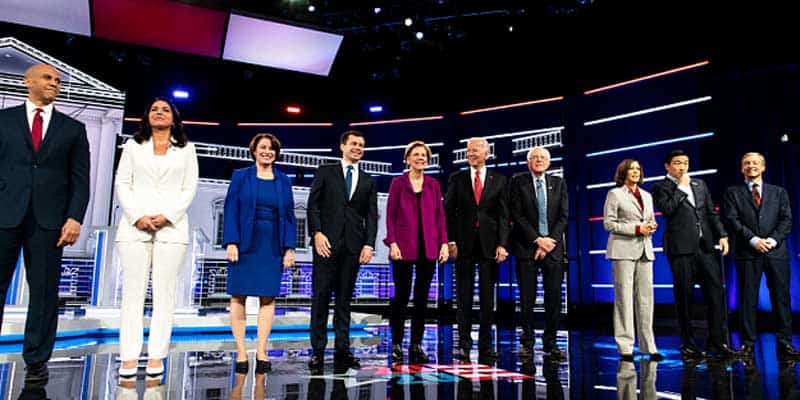 The fifth Democratic debate came and went last night in Atlanta, Georgia. Don’t feel bad if you didn’t know about it; the impeachment inquiry into President Donald Trump ruled the headlines.

For those that missed out, or for ones that just want a recap of the events, this story is the one-stop shop.

Donald Trump and the impeachment inquiry

Hosted by MSNBC and The Washington Post from Tyler Perry Studios, the debate began at 9 pm ET and immediately delved into the public testimonies surrounding the alleged misbehavior of President Trump.

However, despite the early focus on Trump, candidates seemed to want to separate the ongoing probe from their candidacies. As Sen. Bernie Sanders put it, “We cannot simply be consumed by Donald Trump. Because if we are, you know what? We’re going to lose the election.”

Limited pushback for the frontrunners

Sen. Elizabeth Warren and South Bend, Indiana Mayor Pete Buttigieg are two of the Democratic Party’s highest polling candidates. Given their positions at the top of the food chain and their recent controversies, many thought they would be on the defensive last night.

However, things did not really play out like that.

Warren recently released her Medicare for All plan and how she expected to pay for it. But shortly after, the Massachusetts senator said that she would first pass a three-year medicare option similar to the plans endorsed by Buttigieg and former VP Joe Biden before passing a full-fledge M4A plan.

She was asked by moderators to elaborate on her plan at the beginning of the debate, but it received little talk-time after that.

Buttigieg, along with a couple of photo hiccups, falsified the support of 400 Black South Carolinians for his Douglass Plan for Black America. Again, this was never brought up despite Sen. Kamala Harris and Sen. Cory Booker discussing the importance of black voters for the party.

Booker did say, however, that “black voters are pissed off” because politicians only care about them when they need a vote.

As for candidates on stage that did receive criticism, Harris took shots at Rep. Tulsi Gabbard for her open disapproval of the Obama administration and critiques of the Democratic Party.

According to Harris, Gabbard “spent four years, full-time on Fox News criticizing Obama.” Harris would later say that Gabbard “spends full time during the course of this campaign again criticizing the Democratic Party.”

When billionaire activist Tom Steyer was finally given a chance to speak, he challenged the other candidates on climate change. Steyer reaffirmed his commitment to the crisis, saying that he was “the only person on this stage who will say that climate is the number one priority for me.”

“I would use the emergency powers of the presidency. I know that we have to do this,” Steyer continued.

Buttigieg turned his farm subsidies question into the hopes that climate-sensitive farms would become a “symbol of dealing with climate change.”

The sixth Democratic debate will be held in December at the UCLA Luskin School of Public Affairs in Los Angeles, California. Hosted by PBS and Politico, only six candidates have qualified so far.

If the rest of the Democratic candidates running for President cannot meet the DNC requirements of 4% support in four polls and 200,000 donors, only Biden, Warren, Sanders, Harris, Buttigieg, and Sen. Amy Klobuchar will be on stage next month.

Nevertheless, the political betting odds shifted after last night’s debate to place Biden at the top of the party nomination odds with Warren at +250. Buttigieg is close behind with +350 chances and Sanders has +450 odds himself.