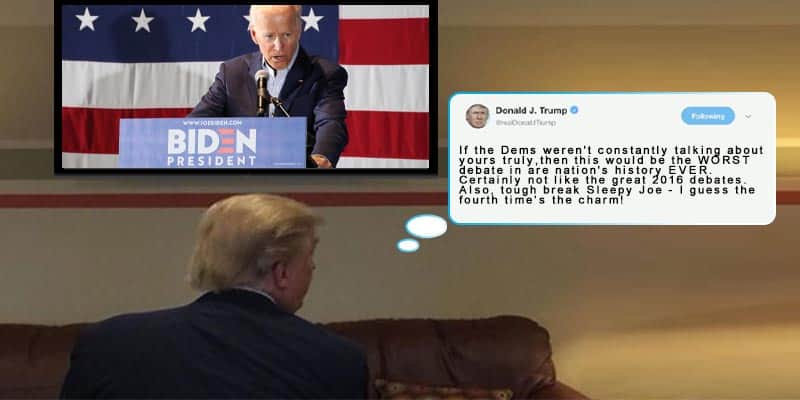 The first 2020 Democratic primary debate is goin’ down in a couple of days, and oddsmakers have posted prop bets on who will put up, shut up, and tweet out (you know who I’m talking about) over both nights.

It’s no surprise that President Donald Trump will be a focus during the debate, but just “how much” of a talking point he ultimately becomes is only one of the ways you can place a wager during the two-night event.

Over the next couple of days, online sportsbooks will likely release a slew of unique prop bets for the first debate, but for now, here’s an early look at the opening odds provided by Bovada Sportsbook.

How many times will Donald Trump be mentioned during debates?

“Trump,” “Donald Trump,” and “President Trump” count toward the total.

How many times will Donald Trump tweet during the debates?

Tweets posted between 9 p.m. ET and 11:15 p.m. ET will count toward the total. Retweets will not count.

How many times will someone mispronounce Pete Buttigieg’s last name?

Washington Post for reference: “How do you pronounce Buttigieg? It’s tricky.”

Which candidate will speak the most during the second debate night (June 27)?

Which topic will the moderator bring up first during the first debate night (June 26)?

Who qualified for the first debate?

After officially qualifying for the debate earlier this month, the 20 Democratic presidential candidates that met the party’s requirements were randomly selected and slotted into one of the two nights.

The first 2020 Democratic primary debate will take place on Wednesday, June 26 and Thursday, June 27 in Miami, FL. Both debates will last from 9:00 p.m. ET to 11:00 p.m. ET and NBC, MSNBC, and Telemundo will broadcast and stream the two-night event across multiple platforms.

Everything you need to know about the Democratic National Committee’s selection process, lineups, schedule, format, and moderators for the first debate can be found here.

The podium order for both nights was announced last week, and the following is the layout — starting from the left side of the stage to the right side — for each evening’s lineup:

Trump remains the favorite in the latest 2020 presidential election odds and currently has a 50% chance to win reelection next year. Former Vice President Joe Biden is seen as his most likely challenger with a 19.05% implied probability to win it all.

It’s important to remember that Trump is the incumbent, and the RNC has already stated it will not host primary debates for potential Republican challengers, making his path to the White House the one of least resistance.

The public money bet so far indicates that the Democratic Party (-120) is the current favorite over the Republican Party (-110), but with a margin that slim — and the general election still 498 days away — it’s safe to say it’s either party’s office at this point in the race.

Here are the current 2020 odds from Bovada as we officially head into the primary debate season later this week.