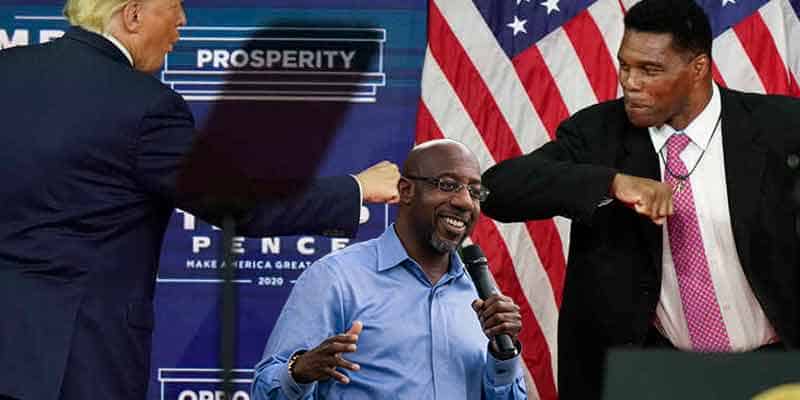 Slim Herschel Walker Odds For US Senate Race vs. Raphael Warnock In GA

It may seem like only a few months ago that Georgia voters elected Democratic Senatorial leadership to represent the Peach State, but regional constituents are already gearing up for another potentially nasty campaign season.

Senator Raphael Warnock’s US Senate seat is up for grabs, and a former University of Georgia Heisman Trophy-winning running back has made it known that he intends to run against him on behalf of the Republican Party.

The move is strategic for the Republicans. Walker is incredibly popular within GA for bringing home an NCAAF national championship back in 1980. He is also African American, which is a demographic that the GOP has struggled to earn votes from in recent years.

While the GOP is hopeful that Walker can siphon some regional voters away from Warnock’s side, online sports betting sites that feature political odds are suggesting that the incumbent is a heavy favorite.

Consider this. The margin of victory for Senator Warnock was relatively small in January. Less than 100,000 votes separated Warnock and Kelly Loeffler in Georgia, and there is a strong possibility that Herschel Walker can make up that gap.

Prediction markets are granting Walker a 63% chance of attaining the GOP nomination for the GA US Senate seat and facing Warnock, and his campaign website is already up and running.

This GA Senatorial race will be one of several hotly contested campaigns across the country as both sides of the aisle attempt to gain a majority. The Democrats have held a slim advantage over the past two election cycles, but political prop bets are forecasting an upheaval in the US House by the Republican Party.

Which party will control the House in 2022?

The above odds for betting on the US House favor the GOP by the exact same margin that suggests Walker will lose to Warnock, but the campaigns are just getting started and election day is not until November of 2022.

There is plenty of time left for either Walker or Warnock to impact their Georgia political betting odds, but the latter has at least already proven his electability whereas Herschel is a complete unknown in the electoral realm.

There’s no question that Walker will be supported by Trump voters. The former President has been a longtime admirer of Herschel Walker’s athletic career and he also invited him to be a contestant on his reality television show, The Apprentice.

Some issues that may thwart Walker’s chances at winning are his history of suffering from dissociative identity disorder which causes unpredictable behavior swings, something that could cause voters to question his ability to govern.

Don’t count out Herschel Walker just yet. He is a fighter – literally. He’s got experience in mixed-martial-arts combat and is one of the most determined and dedicated athletes of our time.

If he applies that ethic toward his Georgia US Senate campaign – and he will – Walker could have a legitimate shot at winning in 2022.