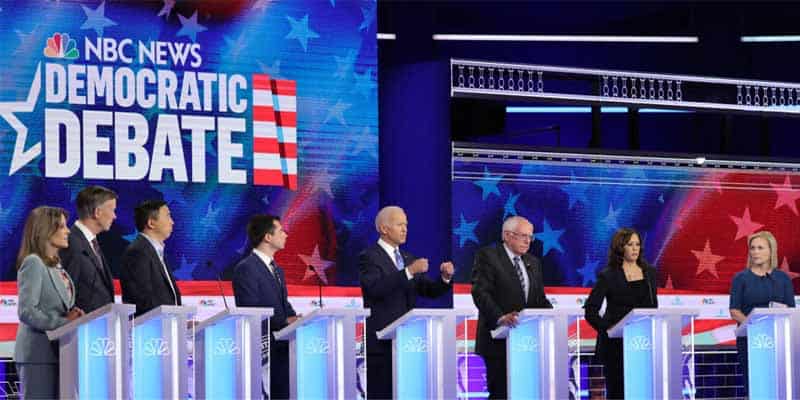 Although CNN’s “The Draw” did not produce its desired reception or viewership, the program set next week’s Democratic debate lineups in a transparent manner.

Viewers can expect to see more noteworthy moments similar to the first debate in June due to the candidates drawn for Tuesday, July 30 and Wednesday, July 31.

The first night of the Detroit debate, July 30, features two of the party’s most progressive candidates: Sen. Elizabeth Warren (+450 to win the Democratic nomination via Bovada) and Sen. Bernie Sanders (+650).

Night 1 also has the second quarter’s biggest fundraiser in Mayor Pete Buttigieg (+550), who brought in $24.8 million between April and June.

Governor of Montana Steve Bullock, who did not qualify for the June debate, will also be on stage during the first night. The Missoula native does not have odds to win the Democratic nomination yet.

The podium positions, starting from left to right, for the July 30 lineup are listed below along with the odds for each candidate taking the stage on Night 1.

Odds to win the 2020 Democratic nomination can be found at Bovada.

Night 2 features the matchup of former Vice President Joe Biden (+375) and Sen. Kamala Harris (+225) again. Following Harris’s challenge to Biden over his past opposition to school bus desegregation in the June debates, the California senator’s odds skyrocketed to take over the top spot from Biden.

Sen. Cory Booker (+3300) is also set to appear on the second night of the debate. Booker, like Harris, challenged the former VP over his recent comments on race.

“I’ve heard this from people across the country, he’s causing a lot of frustration and even pain with his words,” Booker said in response to Biden’s use of terms like “gangbanger” and “boy.”

Here are the podium position and odds for the Night 2 candidates debating on July 31.

CNN’s “The Draw” chose the lineups similar to the NBA’s draft lottery. After the candidates were separated into three tiers to ensure the debate stages were equal, names and dates were randomly drawn to determine each night’s roster.

The ratings and reviews of “The Draw” did not go the way CNN hoped, coming in third behind Fox News and MSNBC according to Nielsen.

James Poniewozik of the New York Times wrote that CNN’s program “had the appearance of a Powerball drawing and just as much depth.”

To watch the second debate, tune into CNN or Telemundo at 8 p.m ET Tuesday, July 30 and Wednesday, July 31. Like the first debate, the debate will also be streamed on YouTube.