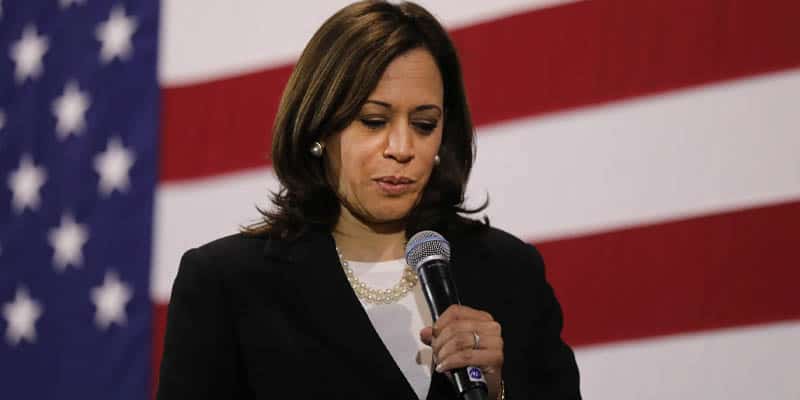 Another former contender for the White House has bit the dust.

California Sen. Kamala Harris, who had the best odds to win the Democratic nomination on multiple occasions throughout the year, announced on Twitter that she was dropping out of the 2020 presidential race.

To my supporters, it is with deep regret—but also with deep gratitude—that I am suspending my campaign today.

But I want to be clear with you: I will keep fighting every day for what this campaign has been about. Justice for the People. All the people.https://t.co/92Hk7DHHbR

“I’ve taken stock and looked at this from every angle, and over the last few days have come to one of the hardest decisions of my life,” Harris said in a Medium post. “My campaign for president simply doesn’t have the financial resources we need to continue.”

“I’m not a billionaire. I can’t fund my own campaign. And as the campaign has gone on, it’s become harder and harder to raise the money we need to compete,” she added. “In good faith, I can’t tell you, my supporters and volunteers, that I have a path forward if I don’t believe I do. So, to you my supporters, it is with deep regret—but also with deep gratitude—that I am suspending my campaign today.”

Many of the Democratic candidates reached out to Harris to support the Senator on her making it this far and on her future endeavors. Even President Donald Trump reached out to offer his condolences, which garnered a clap back from Kamala.

The Rise And Fall Of Kamala Harris

Below is a timeline of how Harris’ odds to win the 2020 Presidential Election changed since the start of 2019. Her rollercoaster of a year proves that no candidate is ever a safe bet and that public perception can turn on a dime.

July (+400 odds, 20% chance) ‒ Harris skyrockets following her strong first debate performance and is the clear frontrunner for the Democrats, according to the political betting sites.

September (+1500 odds, 6.25% chance) ‒ Despite the poor follow-up performance in the second debate, Harris’ plummet coincides with the rise of Elizabeth Warren, who becomes the new Democratic favorite.

October (+3000 odds, 3.23% chance) ‒ Harris continues her slide after fundraising totals for Q3 show stagnation and she loses support across all demographics of the Democratic electorate.

November (+5000 odds, 1.96% chance) ‒ With Warren now slowly falling, Harris is unable to regain any traction from her former supporters as Pete Buttigieg begins taking potential voters from both her and Warren.

December (+8000 odds, 1.23% chance) ‒ As campaign staffers begin leaking infighting to the press, the writing appears to be written on the wall. Harris, unable to continue funding her large operation, called it quits on December 3 when she had her lowest betting odds of 2019.

Below are the latest 2020 election odds, and as for Harris,  I think it’s safe to say she’s no longer a top-tier candidate since the oddsmakers have not given her any chance of winning, according to the most recent listing.

In other words: You can officially say “Aloha” to Kamala’s chances at being elected president this time around!