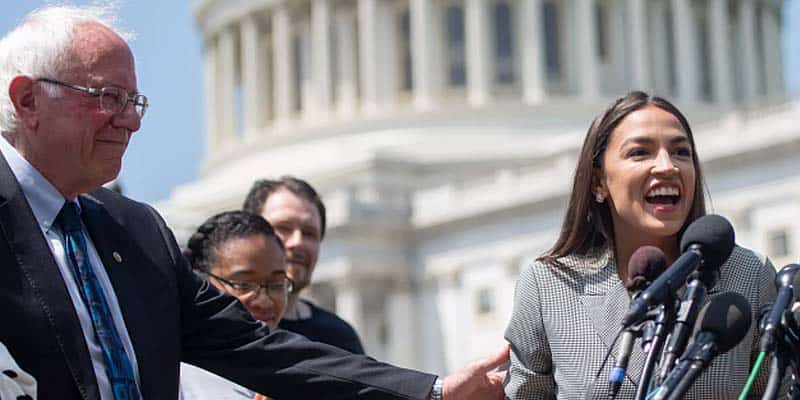 Members Of The Squad Endorse Bernie Sanders, Revitalizing His 2020 Campaign

Post-heart attack, Bernie Sanders might be in the best shape of his life thanks to key presidential endorsements from members of the Squad.

Sanders came up just a little short in the 2016 presidential race, narrowly, losing the Democratic Party nomination to Hillary Clinton. This eventually led to the election of Republican Donald Trump.

Deciding to try again in the 2020 election, Sanders has remained one of the party’s top three candidates in the polls and the odds, usually seated behind Elizabeth Warren and Joe Biden.

But after a recent health scare resulting from a heart attack that required emergency surgery, Sanders’s age became a factor for some voters. However, following the endorsements of a few young members of the Democratic Party, Sanders’s chance might be revitalized.

Alexandria Ocasio-Cortez (D-NY) and Ilhan Omar (D-MN), two rising stars in the Democratic Party and half of the left-leaning “Squad,” have endorsed Sanders for President of the United States.

Ocasio-Cortez is expected to officially announce her support for Sanders during a rally Saturday in Queens, New York. During the Democratic debate on Tuesday, Sanders hinted at a “special guest” attending the event, presumably Ocasio-Cortez.

Omar released a statement in support of Sanders on Tuesday, highlighting Sanders’s fight for the American middle class.

Proud to endorse @SenSanders for President, glad that @AOC and @RashidaTlaib are on board too. It’s time 💪🏽 https://t.co/2mAmXJiKxv

The other two members of the Squad, Rashida Tlaib (D-MI) and Ayanna Pressley (D-MA), have not officially endorsed a Democratic candidate for president.

Although it was previously reported that Tlaib was also endorsing Sanders, the freshman representative told the Detroit Free Press a different story.

“I have not made any endorsement at this time,” she said in her statement. Tlaib did say, however, that she plans to bring Sanders to Detroit on October 27 for a tour.

Pressley, hailing from the same state as fellow-leftist Warren, has remained mum on her endorsement. According to her spokesperson: “Ayanna has tremendous respect for her sisters-in-service. Ultimately, these political decisions are made as individuals.”

The endorsements have yet to influence Sanders’s odds too much, but as his campaign continues, support from the Squad could play a large role in any future success.