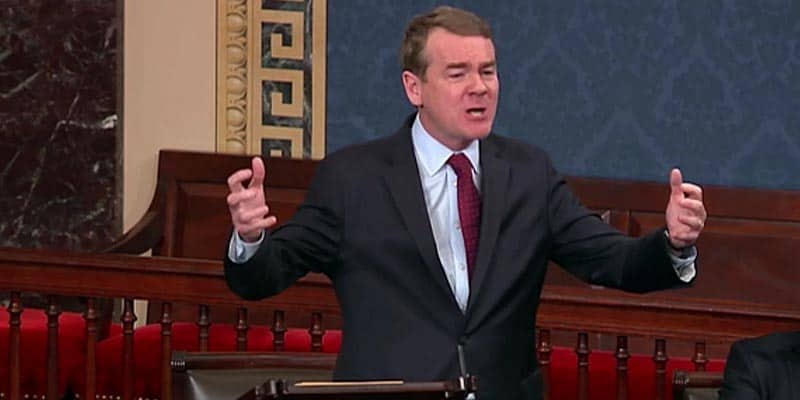 With Sen. Kamala Harris ending her 2020 Presidential election campaign earlier this week, voters got an up-close look at how a former frontrunner can lose ground and drop from the race.

At the end of the day, only one candidate can become the President of the United States, meaning that the rest of the field will have to lose leading up to the election. Before Harris, a number of candidates– primarily Democrats– ended their campaigns, including Beto O’Rourke, Steve Bullock, and Kirsten Gillibrand, among others.

It goes without saying that there will be many more candidates to drop from the race before the 2020 election in November. While waiting for the next Democrat to call it quits, oddsmakers at BetOnline have released odds on who will exit the race first.

With +300 chances, Colorado Sen. Michael Bennet has the best political betting odds of dropping out next. For many voters, the fact that Bennet is still running his campaign is a surprise.

But according to Bennet, he still has a chance to become the Democratic nominee.

“I truly believe that [the Democratic Party nominee] is as likely to be someone polling at 1% today as it is to be the people that are leading in the race today. Stranger things have happened than that,” Bennet said about his chances come 2020.

Of course, Bennet is not the only fringe candidate that has remained in the race despite low polling numbers and a lack of donations. Former Maryland Rep. John Delaney and self-help author Marianne Williamson share +500 odds of being the next Democrats to end their campaigns.

Like Bennet, Delaney and Williamson have not been able to qualify for the last few Democratic debates, forcing them into obscurity among common voters.

Odds of next Democratic candidate to drop out

As for Democrats still making debates, Sen. Cory Booker has +600 odds of ending his run next. Former HUD Secretary Julian Castro also has +600 chances of dropping out, followed by Rep. Tulsi Gabbard at +700, and entrepreneur Andrew Yang at +800.

The Democratic favorites based on odds and polls– Sen. Bernie Sanders (+1600),  former Vice President Joe Biden (+2000), Sen. Elizabeth Warren (+3300), and South Bend Mayor Pete Buttigieg (+3300)– all have the lowest chances of being the next candidate to throw in the towel.

The dropout odds coincide with the nomination odds, just in reverse. For the candidates with the best chances of ending their campaigns, they have the lowest odds of becoming the Democrat to battle President Donald Trump next year.

The list of nomination odds is below, led by Biden at +300 chances.