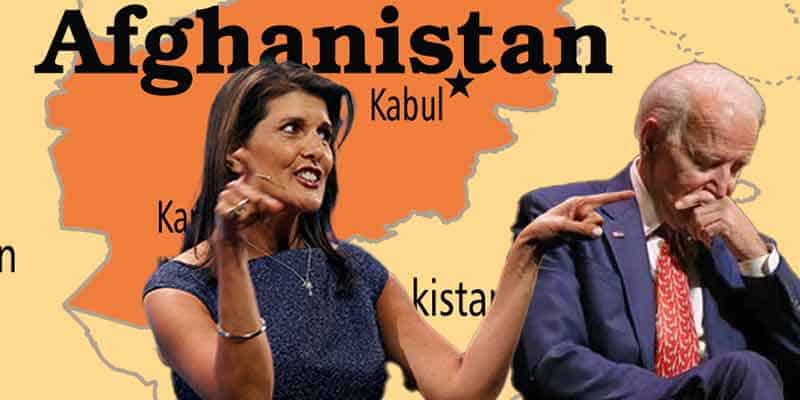 Former US Ambassador to the UN, Nikki Haley, served under President Donald J. Trump and continues to be a well-respected. high ranking member of the Republican Party.

She commands respect, and when Haley speaks, ears from both sides of the aisle are drawn to her remarks. Nikki Haley has joined the chorus of GOP brass that are criticizing Joe Biden’s handling of the mounting tensions in Afghanistan, and her comments suggest that the problems may run much deeper within this current White House regime.

Nikki Haley’s Presidential odds for 2024 have been in play since futures lines debuted at online sportsbooks, and if she’s going to make a power play for the 2024 GOP POTUS nod, the easiest way to do so is by pouncing on Biden when he’s down.

By implying that the Taliban may request and earn a seat at the UN table, Nikki Haley has fired a warning shot across Biden’s bow and is also serving notice to the GOP that she is still among the right-wing’s most elite contenders for the Presidency.

There’s no denying that Joe Biden is in a pinch at the moment with slim hopes for a positive result, however, Haley is employing the same tactic that she is accusing the President of utilizing – gaining traction by negatively assessing those in power.

There’s no doubt about it. President Biden’s 2024 Presidential election odds were greatly enhanced by a sagging Trump tenure that was ripe for critique. He was simply in the right place at the right time, as any member of the Democratic Party would have likely scored a win in November of 2020.

Nikki Haley currently rests in third place in the betting odds to become the next Republican Nominee for President of the United States in 2024. If she is poised to enhance her profile in order to get ready for a national campaign, 8 months into the first term of a sitting President is an opportune time to do so.

Of course, there are two major Republican contenders that Haley must deal with before entertaining any hopes for the Oval Office in the form of Donald J. Trump and Florida Governor Ron DeSantis.

Trump and DeSantis are considered the de facto number one and number two options for the GOP no matter where you look, and the online sportsbooks offering political betting odds that we review are no exception.

Haley is also currently averaging a ranking of fifth in the election odds to become President in 2024, coming in ahead of popular Republican hopefuls the likes of Mike Pence and Ted Cruz.

However, surmounting DeSantis and Trump will be a difficult climb that may require every moment of her existence up until the summer of 2024 when a nominee is chosen through the primary process.