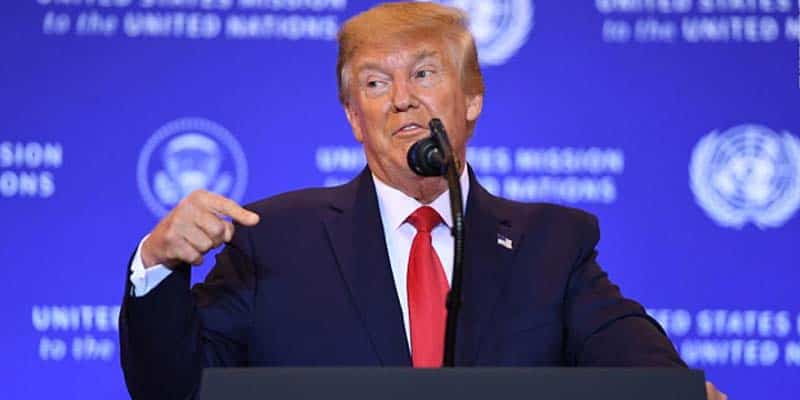 Earlier this week, Donald Trump became the third United States President to ever be impeached following in the footsteps of Bill Clinton and Andrew Johnson.

The House of Representatives approved both articles of impeachment– abuse of power and obstruction of Congress– on December 18. However, this is only the first step in the process. To be removed from office, Trump must be found guilty by the Senate.

There is a chance, though, that Trump leaves office through other means besides the Senate’s mandate. The current POTUS could just resign from his post.

So far, in all of US history, only one President has ever resigned. Following the Watergate scandal where he authorized a break-in into the Democratic campaign headquarters in 1972, Richard Nixon’s lies and coverups got the best of him.

After famously declaring “I’m not a crook,” Nixon resigned shortly after. As a result, Nixon was never able to be impeached and he was subsequently pardoned by new President Gerald Ford in 1974.

This type of outcome is not favored for Trump, though. Based on the political betting odds, Trump’s chances of leaving the White House under his own volition are +600.

Will Donald Trump resign as President of the United States?

When the odds are converted to percentages, the chance of Trump’s resignation is only 10.67%.

The resignation odds are currently the same as his Senate removal odds. According to the oddsmakers at MyBookie, there’s an 89.33% chance President Trump remains in office following the Senate trial.

Will Donald Trump be removed from office by the Senate?

Of course, many Democrats have called for Trump’s removal from office. But today, another organization has been under fire from the President regarding his removal.

Christianity Today, an evangelical periodical that was founded by Billy Graham in 1956, recently posted an article on their site titled “Trump Should Be Removed from Office.”

“The president of the United States attempted to use his political power to coerce a foreign leader to harass and discredit one of the president’s political opponents. That is not only a violation of the Constitution; more importantly, it is profoundly immoral.”

Responding to the scathing piece, Trump took to Twitter.

Claiming that Christianity Today was a failing magazine that “knows nothing about reading a perfect transcript,” Trump asserted that he has done more for the Evangelical community than any other President before him.

….have a Radical Left nonbeliever, who wants to take your religion & your guns, than Donald Trump as your President. No President has done more for the Evangelical community, and it’s not even close. You’ll not get anything from those Dems on stage. I won’t be reading ET again!