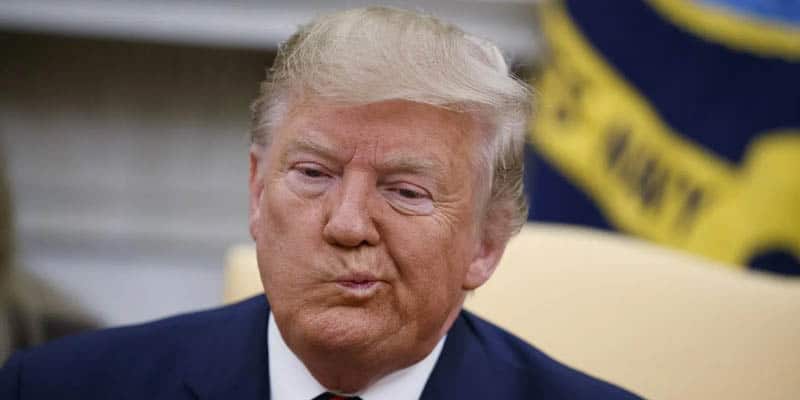 New Poll Shows Americans Lean Against Trump Impeachment, But Odds Are Against The President

With the odds of Trump’s impeachment fluctuating daily, a new poll may provide some insight into why that’s the case.

According to a new poll conducted by Suffolk University and USA Today, Americans are evenly split across party lines on whether President Donald Trump should be impeached.

When looking down party lines, it’s no surprise to see Democrats overwhelmingly favoring Trump’s impeachment and Republicans vehemently opposing it.

However, Independents—which is often one of the biggest determining factors in any election—are mixed on the issue, but they overall favor dropping the investigation over impeaching Trump.

Here are the questions and the percentage of respondents based on party affiliation:

Should the House of Representatives vote to impeach President Trump?

Should the House continue investigating Trump, but not vote to impeach him?

Should Congress drop its investigations into President Trump and administration?

But perhaps even more interesting is how the participants responded when asked about whether Trump’s call with Ukraine is an impeachable offense. Here’s the question and the responses that were given:

The White House has released a transcript summary of a July 25th phone call in which President Trump encouraged the Ukrainian president to pursue investigations involving Democratic rival Joe Biden, and hacking allegations in the 2016 election. Which comes closest to your view?

38% – The phone conversation is an impeachable offense.

21% – The phone conversation was wrong but isn’t an impeachable offense.

31% – There was nothing wrong with the phone conversation.

There are a few ways to look at this. The first is that 59% of Americans believe what Trump did was wrong, compared to the 31% who don’t see anything wrong. Another take could be that 52% of Americans think Trump should not be impeached over his call with the Ukrainian President, while 38% do think his actions are impeachable.

When looking at Donald Trump’s chances of being impeached today, the Bovada oddsmakers still favor the House voting on one or more articles of impeachment before his first term ends. “Yes” is listed at -145 odds (55.8% chance) while “No” has been given +110 odds (44.2% chance).

When looking at the current 2020 Presidential Election odds, Trump still holds a commanding lead over any Democrat.

It’s important to keep in mind that there are still several Democrats in contention for the nomination, while the President will likely remain unchallenged during the primary season.

Once the Democratic nominee is selected, it’ll essentially be a 1v1 race, and we’ll get a much clearer picture of who will sit in the White House after next year’s general election.