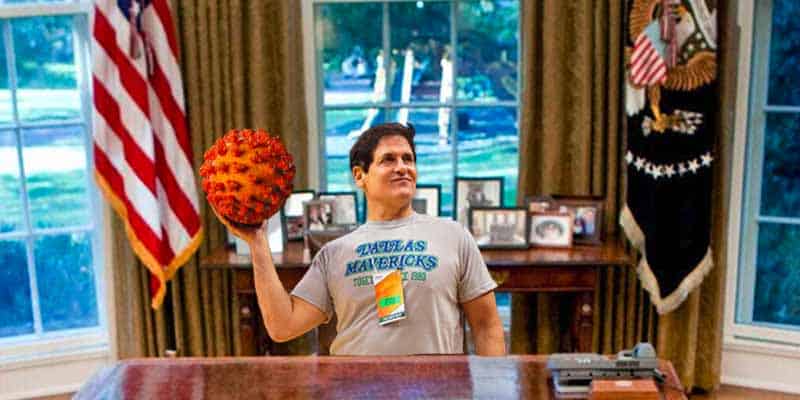 The odds of Mark Cuban winning the presidency in 2020 are nothing short of “longshot” at this point in the race.

Cuban, the billionaire owner of the NBA’s Dallas Mavericks, isn’t ruling out a White House bid and has teased a potential run multiple times over the past month.

Oddsmakers at the top political betting sites have since updated their 2020 presidential election odds to include the Oval Office chances for the Shark Tank regular.

But as the businessman, with a net worth of approximately $4.3 billion, hovers his toes over the surface of the general election pond, do opportunistic bettors smell blood in the water, or is this just another rich person trying to go viral during a global pandemic?

If BetOnline’s political futures board for Tuesday is any indication, then there is more than 99 percent chance that “going viral” is the more likely play by Mark Cuban.

Cuban’s 2020 election odds are listed at +15000, which means oddsmakers give the billionaire an approximately 0.6 percent chance to win the 270 electoral votes needed to become the President of the United States.

Cuban is one of those names, like another certain celebrity-status billionaire who won in 2016, that receives presidential odds but isn’t take seriously. Oddsmakers even had a Cuban 2020 prop bet where they predicted it was doubtful the outspoken businessman will launch a campaign this election cycle.

However, we have to consider the rest of the competition and most notably the presumed Republican and Democratic nominees for the general election on Tuesday, November 3, 2020: President Donald Trump and former Vice President Joe Biden.

Along with not ruling out a potential late-entry into the 2020 race, Cuban has had numerous online interviews since the outbreak where he’s been critical of the Trump administration and some American companies, like scumbag 3M, during the coronavirus pandemic.

Additionally, Cuban said the US economy as a whole needs to take a more progressive approach after the spread of COVID-19 has slowed to where it’s safe for companies and small businesses to go back to work.

In the same interview, the billionaire had this to say when asked about potentially running for President: “I doubt it, but you know, like I said, everything’s a reset right now. You never say never. I’ll keep an open mind, but I seriously doubt it.”

On Easter, Cuban appeared on Fox News Sunday with Chris Wallace and essentially said anything is possible, and all bets are off for 2020.

"You just don’t know what could happen between now and November."
Mark Cuban on whether or not he will be running for President this year. #FNS #FoxNews pic.twitter.com/gG899KktHH

“I never would have considered it prior to a month ago, but now things are changing rapidly and dramatically,” Cuban said. “I’m not saying no, but it’s not something I’m actively pursuing. I’m just keeping the door open.”

“You just don’t know what can happen between now and November,” he added.

While Cuban is certain correctly that anything is possible, the BetOnline oddsmakers have a decent idea of what will happen this fall. And according to them, the businessman is not a legitimate contender for the presidency this year.

Unfortunately for Mark Cuban, the odds of winning the White House are favored only in one billionaire this year.

According to BetOnline, Donald Trump’s 2020 election odds, -130 and 56% implied probability, are favored over all other candidates. Today, a $130 wager would win $100 if the GOP incumbent is elected to a second term.

Coming in as the underdog for the head-to-head matchup is the presidential betting odds for Joe Biden, +125 and 43% chance to win. For the soon-to-be Democratic nominee, a $100 bet would payout $125 if voters are riding with Biden on Election Day 2020.

Since the odds for potential candidates not named Trump or Biden are essentially a 1% combined chance, the sportsbook likely has Cuban’s true probability as astronomically low.

Given that the Trump-Biden bout is pretty much set at this point, the odds of Cuban winning would need to payout somewhere around his net worth to be worth the wager.

Needless to say, but the 2020 election odds for the two presidential candidates competing in the main event should be the only logical option bettors consider.

And you know what, Cuban? You’re fired.

Lastly: If Cuban beats Biden in a push-up contest, we believe agree he deserves the 2020 Democratic nomination.