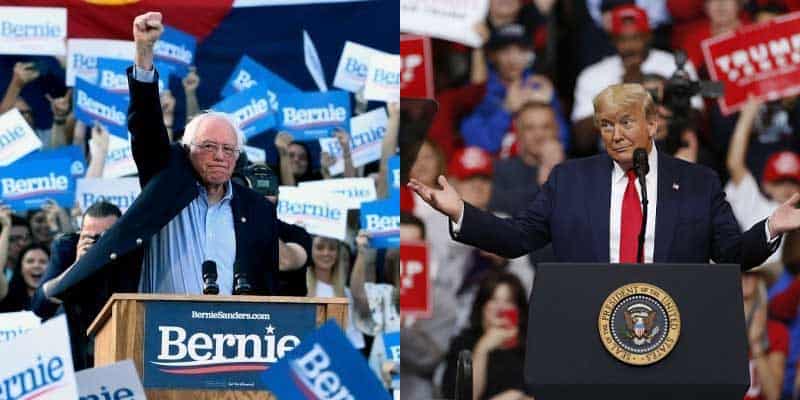 Today is Presidents Day, which celebrates George Washington’s birthday—Feb. 22 but observed on the third Monday of February each year—and honors the accomplishments of Abraham Lincoln and all Presidents of the United States who’ve taken the oath of office in our nation’s history.

Washington unanimously won the first two quadrennial United States presidential elections, 1788–89 and 1792. Still, every general election since has been contested by two or more candidates vying to become the next Commander-in-Chief.

And because there will be at least two competitors who have a chance to win under the current two-party system, you can always bet there will be betting odds available on who wins the upcoming presidential election.

Now serving as the 45th President of the United States, Trump’s first term in office is coming to an end, which means the Republican incumbent is up for reelection on Nov. 3 this year.

Democrats began with the largest field of candidates ever, but the crop has since been culled down to a handful of contenders, led now by projected nominee Vermont Sen. Bernie Sanders, after two early state primaries were held earlier this month.

On this Presidents Day, let’s dive into the current 2020 presidential election odds and find out which candidate has the best chance to win the White House with less than nine months until Americans cast their vote.

The following betting odds and true percentage chance to win the 2020 presidential election is based on each candidates’ current combined political futures, with “juice” removed, found at the top-rated online sportsbooks. The updated board from individual political betting sites can be found further down.

As of Presidents Day on Feb. 17, oddsmakers unanimously predict Trump will win reelection. Although Trump’s odds have cooled after previously hitting a record high following his impeachment acquittal, the incumbent currently holds a combined 56.17% chance to win a second term.

Sanders’ betting odds indicate he is the most likely Democrat to face Trump in the general election and holds a 16.68% chance to win the White House at this point in the 2020 race.

Because Trump is the de facto Republican nominee due to his incumbent status, his path to winning is far easier than Sanders, who, on the flip side, must continue to fend off Democratic rivals and receive 1,990 state delegates to win the nomination outright and avoid a contested convention.

Even though he was an underdog the first time around, make no mistake: Trump, with a 56.17% chance to win, is projected to be the odds-on favorite to win the 2020 presidential election favorite once each party’s nominations are officially awarded this summer.

The following are the individual political futures taken from each online sportsbook on Presidents Day. Remember: If you want to bet on who will win, shop for the best odds first so you can receive the biggest payout.