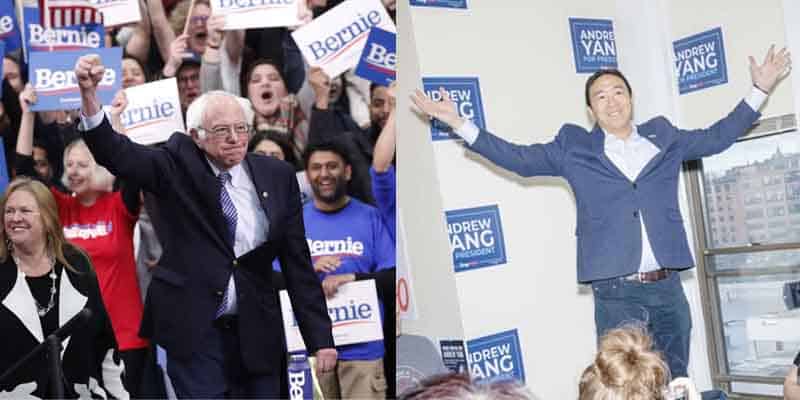 At the end of the first official election of the 2020 Democratic presidential election, there was an undisputable declared winner and one other candidate who left a lasting impact on American politics before the night’s end.

Bernie Sanders won the 2020 New Hampshire primary last night, receiving 25.7% of the vote with 98% of precincts reporting at the time of writing.

The Vermont Senator currently holds a 1.3% margin of victory over Pete Buttigieg, who received 24.4% of the vote, and a 5.9% edge over Amy Klobuchar, who finished with 19.8% support and exceeded polling expectations. Here’s a look at the reported results:

Below is the updated number of delegates that have been awarded to each of the Democratic presidential candidates, according to DecisionDeskHQ.

Sanders’ odds of winning the second primary state of 2020 were heavily favored entering the night. While the polls were open, the Vermont Senator was listed at -600, 85.71% implied probability, for the odds to win the New Hampshire Primary.

Coming into the night, Buttigieg’s betting odds indicated he was projected to finish second, receiving +425, an approximately 19.05% chance to win. Bovada oddsmakers also predicted, based on Klobuchar’s odds, that she would perform well and listed her in third at +2000, a roughly 4.76% probability of winning.

Outside of Sanders winning New Hampshire last night, Andrew Yang’s decision to end his 2020 presidential campaign could have the most impact on the race going forward. Not only did the #YangGang trend higher than the NH primary on Twitter, but Yang also landed near the top of all searches for Feb. 11, according to Google Trends.

Even though his “longer than long shot” bid fell short and Yang’s odds didn’t payout, the New York entrepreneur went farther than any previous everyday American has gone in the race for the presidency.

Yang accomplished his goal of shining a spotlight on automation and raising awareness for universal basic income, a policy he dubbed the “Freedom Dividend” which would give every citizen $1,000 a month, no questions asked, from a value-added-tax (VAT) on tech companies replacing American jobs with automated robots.

His positive, loose, but fun, engaging approach to politics has forever left a forward-thinking mark on the history of the United States and is yet another reason why Yang beat the odds. And based on what he said last night, you can bet we haven’t seen the last of Yang.

Who Will Win The Nevada Caucuses?

The next stop on the 2020 Democratic primary will be the Nevada Caucuses on Sat., Feb. 22, where 36 delegates for the nomination are up for grabs. Candidates still in the presidential race are scheduled to take the stage for the Nevada Democratic debate on Wed., Feb. 19.

Currently, Sanders is the heavy favorite once again, according to the Nevada Caucus odds from Bovada. The Vermont Senator opens at -350 ($350 bet wins $100), which gives Sanders an approximately 77.78% chance to win the third primary state.

Who’s Favored To Be The Democratic Nominee?

With the first two states in the books, the updated 2020 Democratic nominee odds indicate Sanders is the favorite at +110, equating to around a 47.62% chance to face Donald Trump in the general election.

Coming in second is Bloomberg’s odds, which are listed at +250, giving the former NYC mayor a roughly 26.67% win the party’s nomination.