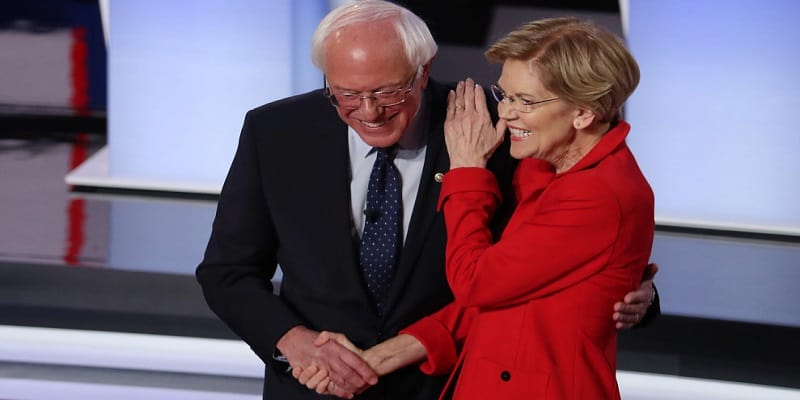 If the last New Hampshire poll is anything to off of, we may see a shift in the 2020 Democratic Nomination odds very soon.

The Granite State is the first official election during primary season—Iowa uses a caucus to divvy up the delegates—and is one of the most vital early states to win a party’s nomination.

And the latest University of New Hampshire/CNN Poll for October shows Vermont Senator Bernie Sanders leading all candidates at 21% for the first election of the Democratic presidential primary. Sanders has gained 2% since the previous poll was conducted in July.

Closely behind Sen. Sanders is Massachusetts Senator Elizabeth Warren at 18%, falling just outside the polls +/- 2.8% margin of error. However, she slipped ever so slightly from the 19% she previously held.

Biden, who led all candidates in New Hampshire at 24% for the July poll, fell a staggering nine points to 15% for the month of October.

South Bend Mayor Pete Buttigieg held firm at 10%, but another big takeaway is how Entrepreneur Andrew Yang, Hawaii Rep. Tulsi Gabbard, and Minnesota Senator Amy Klobuchar all polled at 5% for October after previously polling between 0% and 1% back in July.

Conducted Oct. 21-27 by CNN and the University of New Hampshire.

Poll Question: If the Democratic primary for president were held today, which of the following would you support for the Democratic nomination? (Candidates rotated)

*All other candidates polled below 2%

The first numbers to stick out is Sanders’ odds appear to hold quite a bit of value at the moment. Considering he’s leading the first primary election and has +800 odds (11.11% chance) currently shows a sizeable return on investment at this stage of the race.

Warren’s nomination odds remain strong at +100 (50% chance), and considering she falls just outside of the margin of error, the Massachusetts Senator remains the safest bet in the race with only 97 days to go until the Iowa caucuses and NH primary election just 105 days away.

Biden appears to still be thriving on his name recognition, especially in South Carolina, which is why he currently holds the second-place spot at +400 odds (20%).

The former VP recently reversing his stance on not accepting super PAC money is a sign of desperation after a subpar third-quarter fundraising effort and may cause public perception to shift when other Democrats are given the chance to attack his position on national TV during the November debate.

For the rest of the field, it’s still a bit too early to tell. But with more debates still to come and over three months to go until the first votes are cast, it’s still anyone’s race for the 2020 Democratic Nomination.