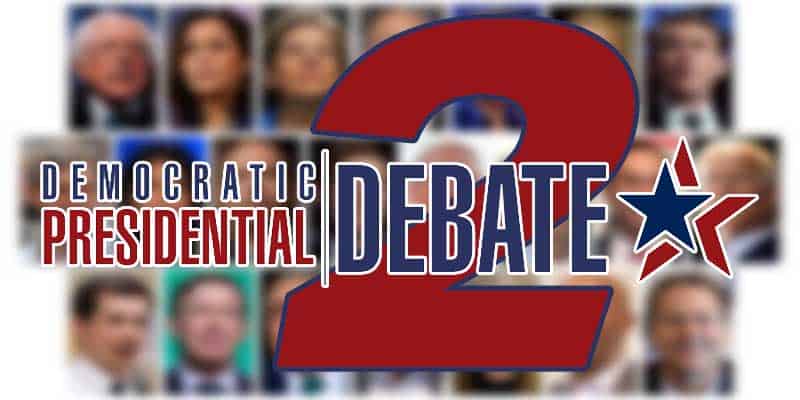 The Motor City has its 2nd Democratic Debate participants ready to go.

The 20 Democrats that will debate on stage July 30-31 in Detroit, Michigan were announced last night and there’s only one lineup change from the June debate.

To qualify for the July debate, candidates had to certify to the DNC that they achieved 1% in three approved polls or received 65,000 unique donations with 200 donors each from 20 separate states.

In alphabetical order, the candidates that made the cut are the following. This list also includes the candidates’ odds to win the Democratic nomination, via Bovada.

Bullock, who was not in the first Democratic debates, will replace California Rep. Eric Swalwell following his campaign dissolution earlier this month.

The Montanian announced his qualification on MSNBC Wednesday morning.

“I’m going to be in the second debate in two weeks. I’m really excited about it.”

Neither Miramar, Florida Mayor Wayne Messam nor Massachusetts Rep. Seth Moulton made the July debate cut. Both were also missing from the June debate.

Other names to miss the cut include former Pennsylvania Rep. Joe Sestak and billionaire Tom Steyer.

Steyer, who didn’t announce his campaign until earlier this month, never planned to qualify for the July debate. Instead, the former hedge fund manager has focused his sights on the September debates.

“Given that we entered the race just days before the deadline, we never expected to make the July debates. Since launching the campaign, our focus has been qualifying for the September debates in Houston,” Steyer’s spokesman said.

Like the June Democratic debate, the July debate will be over the course of two nights with ten candidates on stage per night.

To determine each night’s lineup, CNN is doing a live, public drawing tonight. “The Draw,” hosted by Anderson Cooper, will be televised at 8 p.m. ET.