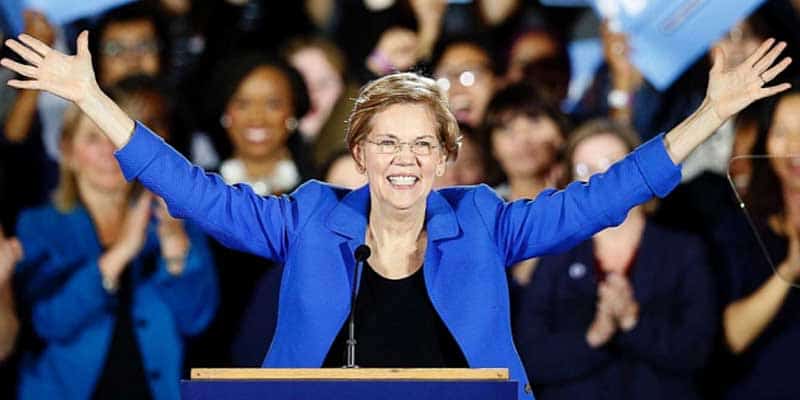 Over the course of three hours last night, ten of the Democratic Party’s most prominent names took the stage in Houston, Texas to discuss health care, gun control, immigration, and many other topics that are vital to daily America life.

After everything was said and done, there was a shift in the party’s nomination odds. While positions didn’t change, there were a number of changes to the Democratic candidates’ chances of taking on Donald Trump in the 2020 election.

As the Democratic favorite before the debate at +200, Elizabeth Warren increased her odds of earning the nomination to +175 odds. Other possible nominees saw their odds decrease, however. Joe Biden dropped from +250 to +275, Bernie Sanders from +550 to +575, and Kamala Harris from +600 to +700.

The only other Democrat to increase their odds after last night was Beto O’Rourke, likely due to his strong stance against assault weapons. The Texas native jumped from +6600 to +5000 chances of being the Democratic nominee.

Ironically, Trump’s reelection odds also increased after the debate. Prior to Thursday night, Trump had +110 of winning the 2020 election. Today, the incumbent has +105 odds of earning four more years in the White House.

To compare the odds of each Democrat after the debate, a list is provided below. Their previous odds are also listed in parentheses.

There are a few key moments from the debate that affected the odds today. First, Warren spent most of the debate addressing voters directly instead of other candidates or the moderators. While she was a little vague answering questions regarding taxation, she performed well enough to garner support.

Despite slipping a bit in the odds, Biden was more aggressive in this debate. There were still times where he fumbled his words or misspoke. One particular instance occurred when Julián Castro took a shot at the former VP’s memory.

Castro, a candidate with little chances to earn the nomination at +7500 odds, was trying to make a splash with the exchange but came off rude and ill-mannered.

Speaking of fringe-hopefuls looking to get into the spotlight, home-state candidate O’Rourke boosted his odds with his statements regarding assault weapons.

“Hell yes, we’re going to take your AR-15, your AK-47. We’re not going to allow it to be used against our fellow Americans anymore,” O’Rourke exclaimed. The former Texas representative is from El Paso, Texas, a city still in shock from a mass shooting last month that left 22 dead.

O’Rourke, along with every other Democrat, still has plenty of time to earn more voter support with the upcoming debates, assuming they can qualify. The next debate is to be held in a to-be-announced location in Ohio next month. Look for updates on the October event, whether it is Democratic debate prop bets, qualifying candidates, or other relevant news.

BetOnline is accepting action on which city will host the debate. Currently, Cleveland and Columbus share the best odds at +200.