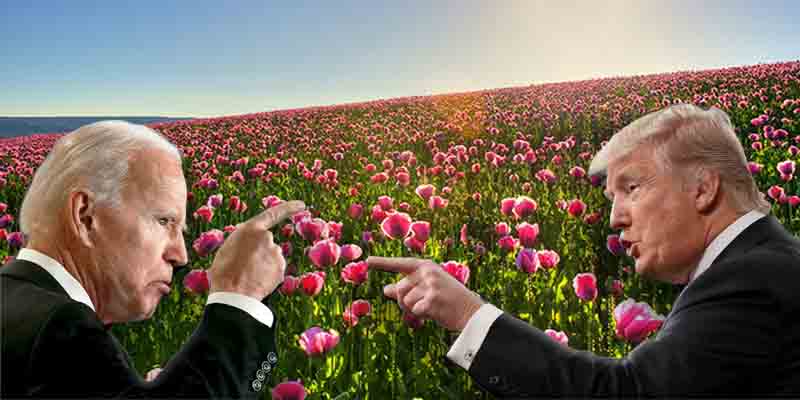 And the updated 2020 US presidential election odds have already bloomed new flowers full of fresh chances on today’s “Vernal Equinox.”

Because humanity has never taken the time to tell time perfectly, the Spring Equinox is one day earlier this year.

Why? Well, most of America used to be farmers, and they based everything on calendars and the Farmer’s Almanac. Much like leap years and time changes, people seem hesitant to update “ways to tell time” even though farmers are only 1.3% of the employed US population—for now.

But amid the coronavirus pandemic and on the first day of Spring, President Donald Trump’s reelection odds are co-favored with Joe Biden’s 2020 presidential election odds at -105, meaning a $105 wager would win $100.

Based on the implied probability from Bovada’s oddsmakers, both Trump and Biden now have an approximately 49% chance to win the presidency on Tuesday, November 3, for the 2020 US general election.

But Does Bernie Have A Chance?

While there’s a chance everyone gets health care and money to spend during a national emergency (and after), unfortunately, the odds of that happening—as well as Bernie Sanders becoming the next President or beating the Democratic nomination odds—probably mirror Lloyd Christmas’ chances of hitting it off with Mary Swanson.

On Thursday, we must bid “Aloha!” to Hawaii Rep. Tulsi Gabbard.

“Aloha” as in “goodbye” after Gabbard ended her 2020 Democratic presidential campaign and “aloha” as in “hello” because Tulsi is in the headlines for what seems like the first time in months.

Could it be because Tulsi Gabbard endorsed Joe Biden for President of the United States on the first day of Spring? And the former VP graciously accepted the endorsement?

.@TulsiGabbard has put her life on the line in service of this country and continues to serve with honor today. I’m grateful to have her support and look forward to working with her to restore honor and decency to the White House.

Or because Gabbard managed to win two delegates from American Samoa—only two fewer than Mike Bloomberg, who spent over $500 million on ads for one win on Super Tuesday and 46 total delegates?

With two points scored on the delegate board, Gabbard finishes seventh among the seven candidates to receive delegates from the Democratic primary.

And let’s not forget: Dropping out and endorsing Joe Biden officially means Tulsi Gabbard—a US congresswoman of color and Iraq war veteran—is not a Republican asset or Russian agent, as 2016 election runner-up Hillary Clinton and the toxic “#TulsiIsARussianAsset” influencers peddled on social media and mainstream media for a good chunk of 2019 and 2020.

Tulsi should tell the “Democratic Party establishment” and the “online cult of Clinton” to go shove their “nesting dolls” where the sun doesn’t shine—but I digress.

Could Tulsi Be Biden’s Pick For VP?

If Joe Biden follows through and selects a woman as Vice President, his top choices—based on the 2020 Democratic primary results—are Elizabeth Warren (73 delegates), Amy Klobuchar (7 delegates), and Tulsi Gabbard (2 delegates).

Tulsi’s VP odds—at +10000, a $100 bet wins $10000—now become a compelling political proposition bet even though she has a presumed <1% implied probability of being the she that Biden picks as Vice President on the 2020 Democratic ticket.

Tulsi Gabbard is anti-war and a progressive who supports both Bernie Sanders’ Medicare For All health care bill and Andrew Yang’s Universal Basic Income plan, a.k.a. The “Freedom Dividend” to give all Americans $1,000 a month.

To top it off, Gabbard is not only a woman who picked up delegates this cycle, like Warren and Klobuchar, but also a woman of color, who happens to be one of the first two female combat veterans to serve in the US Congress and also the first Hindu and Samoan-American member of the US House of Representatives.

Despite Gabbard checking what seems to be every box imaginable for Biden’s VP pick, the oddsmakers appear to disagree vehemently.

When looking at the Vice President betting futures at Bovada, both Kamala Harris’ odds and Amy Klobuchar’s odds are heavily favored over the rest of the Biden VP field, which is dominated by women candidates.

At +200 and +225, respectively, Harris and Klobuchar are favored with roughly a 30% chance to get the VP selection from Biden, who is the prohibitive nominee at this point in the race.

But if Biden wants to beat Trump, he’ll need a huge percentage of Bernie’s younger voters to vote for him in the general election. The best chance of getting Sanders’ supporters is to select a progressive-minded VP.

Tulsi fits the Biden VP criteria perfectly, but when she gets selected as his running mate is something we’ll just have to wait and see.

*The first candidate to accept the nomination will be declared the winner.