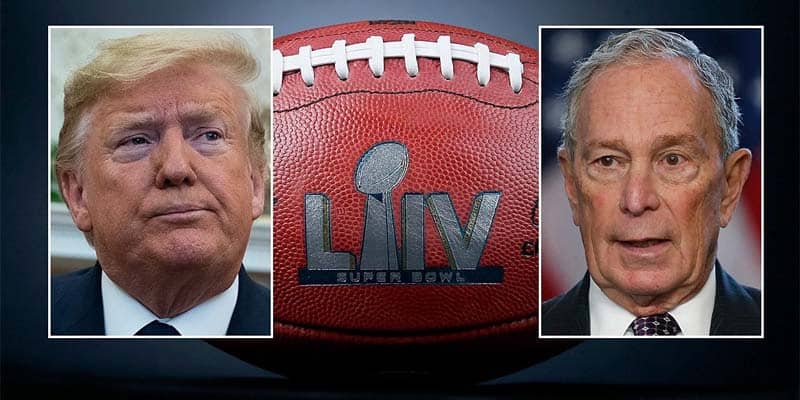 When the Kansas City Chiefs and San Fransisco 49ers kick off Super Bowl 54 this Sunday in Miami, FL, campaign ads from two candidates will air during the commercial breaks.

And today, we got our first look at the first-ever nationwide presidential campaign ads for the Super Bowl.

So, was it worth the $10-to-$11 million both campaigns spent for a single minute during the most-watched sporting event in the country?

And more importantly: Will it have a significant impact on either candidates’ odds to win the 2020 presidential election? Let’s find out.

“George” is the title of Bloomberg’s Super Bowl commercial and shows Texas mother Calandrian Simpson Kemp telling the story of how her 20-year-old son George, who had dreams of playing in the NFL one day, was a victim of gun violence outside of Houston in September 2013.

“I just kept saying, you cannot tell me that the child I gave birth to is no longer here,” Kemp says in the ad. “Lives are being lost every day. It is a national crisis. I heard Mike Bloomberg speak. He’s been in this fight for so long. He heard mothers crying, so he started fighting.”

“When I heard Mike was stepping into the ring, I thought, ‘Now we have a dog in the fight,’” Kemp continues. “I know Mike is not afraid of the gun lobby. They’re scared of him, and they should be.”

“Mike’s fighting for every child. Because you have a right to live, no one has a right to take your hopes and dreams,” she says to end the ad.

“Stronger, Safer, More Prosperous” is the title of Trump’s Super Bowl ad. The Trump 2020 campaign elected to split the ad buy into two separate commercials, with the first 30-second ad revealed today and the second to be kept secret until it airs during the big game.

Trump’s commercial touts his economic record since pulling off the upset in the 2016 presidential election and getting sworn in as Commander in Chief the following January.

“America demanded change, and change is what we got,” the narrator says. “Under President Trump, America is stronger, safer, and more prosperous than ever before.”

The ad ends with Trump declaring at a campaign rally: “And ladies and gentlemen, the best is yet to come.”

Over 100 million viewers will watch this year’s Super Bowl on FOX, so both of their commercials will be seen by more people than any other campaign ad in the history of the presidency.

Because of the unprecedented campaign ad buys, it’s impossible to gauge how much it will impact their chances of winning on Tuesday, Nov. 3, 2020.

Trump’s 2020 reelection betting odds prior to the Super Bowl indicate he’s a pretty heavy favorite at this point in the race. With -130 odds ($130 bet wins $100), the oddsmakers believe the Republican incumbent has an approximately 56.52% chance of getting elected to a second term.

The betting odds for Bloomberg are much longer. Still, the billionaire Democrat has seen his chances risen after entering the race two months ago and spending over $275 million on TV/radio ads during that time. He currently sits at +1000 odds ($100 bet wins $1000), which gives Bloomberg a roughly 9.09% chance of becoming the next President of the United States.

We’ll see how their 2020 election odds perform after the Super Bowl, but for now, he’s where Trump, Bloomberg, and the rest of the presidential candidates stand as the race for the White House heats up.