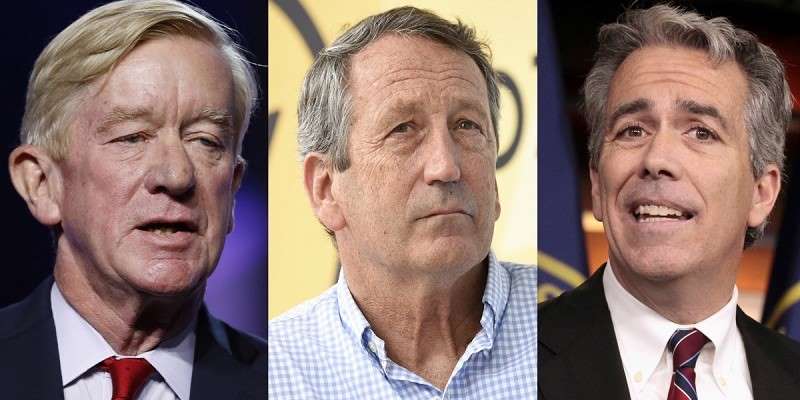 The Three Stooges are making a comeback.

And, as has become a tired cliché in the entertainment industry, they’re calling President Donald Trump a coward.

Of course, we’re not talking about Larry, Curly, and Moe (or even Shemp), here.

…but then he ran for Congress and won, only to lose his re-elect after I Tweeted my endorsement, on Election Day, for his opponent. But now take heart, he is back, and running for President of the United States. The Three Stooges, all badly failed candidates, will give it a go!

And they are furious.

In the wake of several states canceling their GOP primaries, Trump’s alleged competition is circling the wagons, framing the president as a weakling who’s running away from important debates with credible challengers.

Except for they’re not really all that credible.

All one has to do to gauge the seriousness of these GOP hopefuls is to check how they’re polling. And if you want an even better indication of where they stand against the incumbent, just look at the Republican betting odds at any major online sportsbook.

As you can see, Bill Weld and Joe Walsh aren’t attracting any action at BetOnline. In fact, they’re not even on the boards. And other big betting sites like Bovada and MyBookie aren’t currently offering odds on the Republican primary at all. For bettors, the biggest challenger to Trump’s reelection odds is his own VP!

If that’s not a good indication of where things stand with the GOP primary, nothing is. (And no, Mike Pence hasn’t declared his candidacy, so barring Trump’s removal from office, he’s a much longer shot than his generous +2000 odds would imply.)

Nevertheless, insults are low-hanging fruit, and instead of an incumbent with near-record party approval ratings, Trump has been painted as a scared little weasel unwilling to debate the competition to defend his policies and platform.

This, of course, is the same Donald Trump who made mincemeat out of a crowded Republican primary in 2016, then faced down the most foregone conclusion in US election history and pounded that sanctified and untouchable political dynasty into the dirt.

He’s clearly quaking in his boots (which probably have lifts in them, because he’s such a little man).

The funniest part in this latest Three Stooges screenplay, of course, is that you, the viewer, are being asked to forget all about the previous movies.

Reality is less hysterical: Same-party primaries are often canceled during the re-election cycles of sitting presidents, and it’s never been controversial. Until now.

Even left-wing Politico can’t hide behind the façade, try as it might to vilify a common procedural practice:

The moves are the latest illustration of Trump’s takeover of the entire Republican Party apparatus. They underscore the extent to which his allies are determined…to deny Republican critics a platform to embarrass him.

Trump advisers are quick to point out that parties of an incumbent president seeking reelection have a long history of canceling primaries and note it will save state parties money. But the president’s primary opponents, who have struggled to gain traction, are crying foul, calling it part of a broader effort to rig the contest in Trump’s favor.

But like all Trump controversies to date, this one doesn’t seem to have legs, especially on the presidential odds boards. There, Trump is still trending where he’s been for months, firmly on top of all challengers, Democrat and Republican alike.