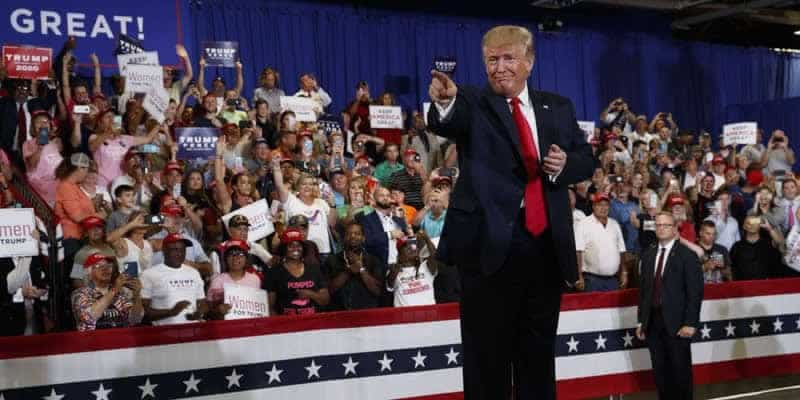 The larger purpose of the event wasn’t strictly self-serving. Instead, the rally was held in support of Republican Dan Bishop, who looks to defeat Democrat Dan McCready for a seat in the US House of Representatives (NC-9).

“Tomorrow, we take the first steps to firing Speaker Pelosi and winning back the House in 2020,” said Trump. “We need everybody to get your friends, get your family, and get your neighbors and get out and vote for Dan Bishop.”

The results of the North Carolina special election will undoubtedly be interpreted as a referendum on Trump’s staying power in districts he easily carried in 2016. As such, Trump’s presidential election odds could change appreciably by this time tomorrow, though they’re currently holding steady at +110.

Of course, despite the energy of the event, many in the media are painting The Donald in a more negative light. In an ABC-WaPo poll strategically released just hours after the North Carolina rally, Trump’s approval rating is down six points.

This drop, claims analysts, is tied to the #KingOfDebt’s handling of the economy, particularly in regards to the so-called “trade war” with China.

One of the biggest highlights of the Fayetteville rally was less political and more personal, as Trump took time to address the world’s most famous combover.

Speaking about his willingness to campaign for Bishop’s candidacy in Tuesday’s special election, Trump says he sought out a larger outdoor venue for the rally, though relocation was ultimately decided against due to inclement weather.

“I was even willing to stand out in the rain and get my hair soaking wet. … I would’ve been very proud to have done it. It would have shown it’s my real hair, at least,” said Trump. “It’s my hair. May not be great, but I will say it’s better than most of my friends’ who are the same age.”

That revelation could be a slippery slope. History, after all, doesn’t tend to remember politicians with distinctive hairstyles particularly fondly.

On the other hand, Trump has consistently proven that such old rules don’t really apply.

And besides, corn isn’t that offensive.