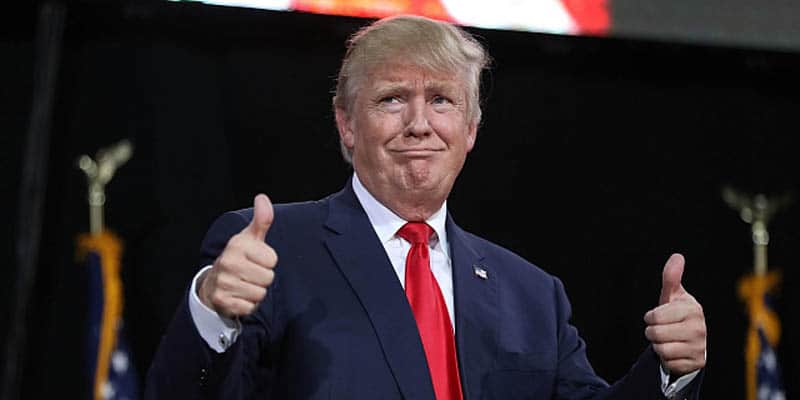 Even amidst an impeachment inquiry, Donald Trump is still bringing in astronomical fundraising numbers.

For the third quarter of 2019, Trump and the Republican National Committee received $125 million in donations. According to Trump’s campaign manager, Brad Parscale, the President earned 50,000 new donors after House Democrats launched the inquiry on September 24.

The huge haul exceeds his $105 million second-quarter total and sets a new record for presidential contributions.

Between the three quarters, Trump has raised over $300 million. For comparison, Trump’s third-quarter donations double the $70 million in contributions President Obama earned in his 2011 third quarter ahead of a successful 2012 reelection.

Regarding the idea of reelection, Trump has the best odds to win the presidential election next year with +120 chances, assuming he does not defy the impeachment or resignation odds and cannot take office in 2020.

Odds to win the 2020 presidential election

Trump plans to use the political contributions, which includes $156 million in the bank, “to hold House Democrats accountable,” according to RNC Chairwoman Ronna McDaniel.

“We are investing millions on the airwaves and on the ground,” McDaniel also said.

The Trump campaign has devoted $8 million to television ads targeting Democrats that are trying to “steal” the 2020 election and another $2 million on advertisements criticizing Democrats for supporting impeachment.

Official fundraising totals are not required to be reported to the Federal Election Commission until October 15, but a few Democratic candidates have also released their numbers for the third quarter.

Sen. Bernie Sanders upped his second-quarter contributions from $18 million to $25.3 million while Mayor Pete Buttigieg dropped from $24.9 million to $19.1 million in the third.