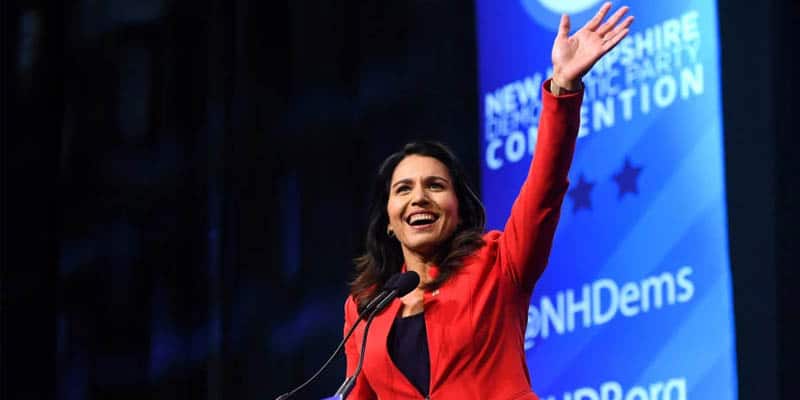 Tulsi is officially going all-in on her 2020 campaign.

Hawaii Rep. Tulsi Gabbard, a Democratic nomination contender, announced Friday that she is “fully committed to my offer to serve” as President of the United States and would not be seeking reelection to Congress, choosing to focus all of her time and energy on her White House bid.

Today I’m officially announcing that I will not be seeking reelection to Congress in 2020. Throughout my life, I’ve always made my decisions based on where I felt I could do the most good. In light of the challenges we face, I believe I can … pic.twitter.com/F0StYoA66n

“I’m so grateful to the people of Hawaiʻi for allowing me to serve you in Congress for the last 7 years,” Gabbard said in a series of tweets. “Throughout my life, I’ve always made my decisions based on where I felt I could do the most good. In light of the challenges we face, I believe I can … best serve the people of Hawaiʻi & our country as President and Commander-in-Chief.”

Gabbard has been a member of the House of Representatives since 2013, representing Hawaii’s 2nd Congressional District during that time.

And Gabbard was likely expected to easily win reelection again since she defeated her Republican opponent during the 2018 midterms by a margin of 50%.

Some political pundits have suggested she would face a stiff challenge from Democrat state Sen. Kai Kahele while others have continued to float the unsubstantiated narrative that she’s planning to run third-party, despite Gabbard stating multiple times that she won’t.

The conspiracy that Gabbard will run as a third-party candidate hit a breaking point last week when Hillary Clinton, the 2016 Presidential runner-up and former Secretary of State, alleged that the Democrat from Hawaii was a Russian asset and that they were “grooming her to be the third-party candidate.”

We’ll leave the spreading political slander to 2019’s best master click-baiters—a.k.a. The “major” media outlets who survive spewing hot takes on the reg—so instead, let’s take a look at what Gabbard’s odds are for the 2020 Democratic Nomination.

You know, something that measures what people actually think since it requires an individual to put their money where their mouth is in order to be successful.

Gabbard does have a little bit of a longshot chance of becoming the nominee at the moment. Currently, she sits at +2500 odds, which equates to approximately a 3.85% chance.

However, it’s worth noting that there’s a long way to go until the Iowa Democratic caucuses on Monday, February 3, 2020—the first stop during primary election season.

Anything can happen in politics, but there’s no question that the clock is ticking for Gabbard, and she’ll need to find some ways to build momentum in the next three months.

After Gabbard got a decent boost in fundraising, polling, and social media followers last week, getting Clinton to continue spreading conspiracies just might be her safest bet.