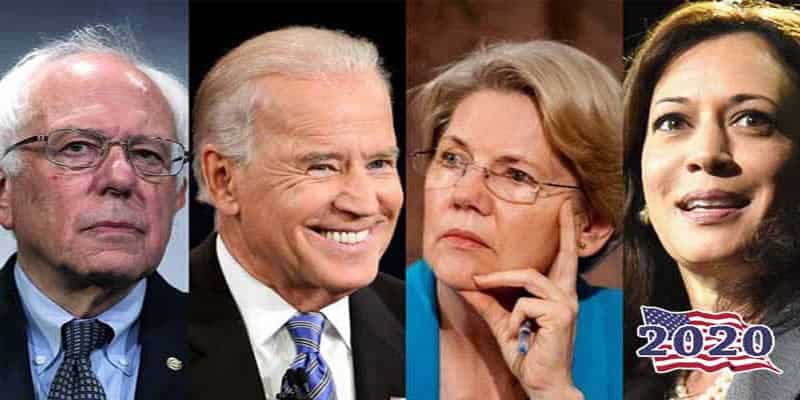 The field for who will president seems to be wide open, and you’ve likely already seen odds popping up for names like Oprah Winfrey, Dwayne “The Rock” Johnson, or even Mark Zuckerberg, but these are far from likely to happen.

However, that is what people said about Donald Trump, and those who bet on him early made a fortune.

Despite some rumblings on the right, it’s rather unlikely President Donald Trump will have any serious challengers standing in his way of getting the Republican nomination in 2020.

With that in mind, the attention now turns to the left.

While it would be interesting to see another wild card candidate, like Trump, enter the fray on the left, the Democrats will likely play it safe, nominate an experienced politician, target President Trump’s inexperience in Washington D.C., and use his higher unfavourability numbers against him.

But who are the most likely candidates to lead the charge on the left in 2020?

Here are five key things to look at when trying to figure out who’s indicating a potential run at the presidency. Each candidate has done multiple or all of these since the 2016 election ended:

Keep in mind that no candidate has officially entered their name into the race, but the five candidates below have the current best odds to receive the Democratic nomination for president in 2020, according to Bovada.

The Democratic Senator from California has been one of the most vocal critics of President Trump since he took office and become one of the leaders of the movement against Trump. She recently scheduled her first visit to Iowa, which was the most recent signal to many that she will officially enter the race next year. In July 2018, she announced that will she be publishing a book, and has been increasing her Facebook advertising to areas outside California.  As the current favorite and if elected, she would become the first woman and first female minority to serve as President of the United States.

Senator Sanders entered the race against Hillary Clinton and managed to take several states from her in the 2016 Democratic Primary Elections before conceding the nomination. He released a book in 2016, has organized two political organizations, and in May 2018 said he was seriously considering running for president again in 2020. Even though he appears to be in great health and amassed a huge following in 2016, time seems to not be on his side and will turn 79 years old in 2020.

The former Vice President served from 2009 to 2017 under President Barrack Obama and was rumored to run in 2016 before officially announcing that he would not seek the Democratic nomination. In 2018, several media outlets and Democratic organizations have pinned Joe Biden as a possible candidate in 2020 due to his high favorability ratings. He was quoted in July 2018 saying that he would officially announce his decision on whether to run for president in 2020 by January 2019.

Many political analysts speculated the first woman elected as a Senator from Massachusetts to be a potential nominee for Vice President in 2016 for either Hillary Clinton or Bernie Sanders but showed no interests in either. However, in September 2018, she was quoted in saying, “After November 6 I will take a hard look at running for president.” She has been a sharp critic of President Trump and Republicans for how they handled the Brett Kavanaugh Supreme Court nomination. In addition, she has recently deployed staff to Iowa, New Hampshire, South Carolina, Nevada, Florida, Ohio, Michigan, and Wisconsin.

The first African-American elected Senator from New Jersey recently traveled to Iowa, but many his bid for 2020 Democratic Nomination began with his speech at the 2016 Democratic Convention, similar to how Barrack Obama’s speech at the 2004 convention propelled him into the conversation and him eventually winning the presidency in the 2008 general election. However, Booker’s main challenge will be to somehow separate himself from the pack, since right now he policies line up almost exactly with the other front-runners such as Kamala Harris and Bernie Sanders.