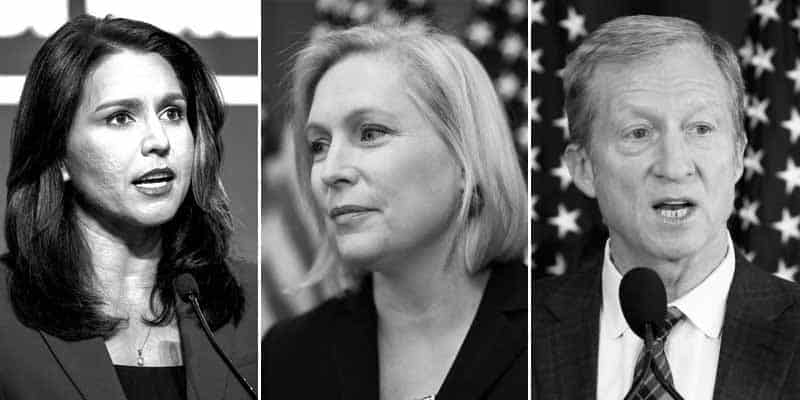 Will they or won’t they? Odds Gillibrand, Gabbard, Steyer qualify for 3rd debate

With one week until the August 28 deadline, many candidates will be on the outside looking in when the third Democratic debate starts on September 12 in Houston, Texas.

It was announced yesterday that former Housing and Urban Development Secretary Julián Castro was the tenth Democratic candidate to qualify for the debate next month.

While the debate stage could only feature ten candidates, there are a few Democratic hopefuls that are on the cusp of qualifying. For the three that are the closest, Sen. Kirsten Gillibrand, Rep. Tulsi Gabbard, and billionaire Tom Steyer, BetOnline is taking action on their odds to take the stage in September.

To qualify for the third debate, Democrats must receive donations from 130,000 unique donors and earn 2% support in four polls before the August 28 deadline.

Of the three, Gillibrand has the least likely chance to qualify. The New York Senator, whose campaign focuses on mental health and women’s rights, only has one qualifying poll and is short of the donation threshold by 20,000 donors.

Oddsmakers do not expect Gillibrand to make the event, giving her -1200 odds to miss the debate. But even if Gillibrand cannot secure a spot and eventually drops out of the race, she is open to serving as Vice President.

“Of course,” she said when asked about becoming VP. “I will do public service in all its forms.”

Another woman hoping to qualify for the Houston debate is Gabbard. The first Samoan to ever run for president, Gabbard is well over the donor threshold. Via her official twitter, her campaign had over 159,000 donations on August 11.

Gabbard is still short on the polls, though. The first Hindu to serve in Congress only has two polls under her belt, needing two more before the deadline. With only a week until then, BetOnline gives Gabbard -800 odds of missing the September debate.

Surprisingly, the candidate with the best chance to make the debate is Steyer, who didn’t even start his campaign until early-July.

Earning his fortune as a hedge fund manager before gaining popularity as the leader of Need to Impeach, Steyer met the donor requirement in one month’s time. Now, the philanthropist just needs to earn 2% in one more qualifying poll to snag a spot in Houston.

Oddsmakers think it’s likely to happen. Steyer has -500 odds of making the third debate before the August 28 cutoff.

If any, or all three, of these candidates meet the requirements before the deadline, they’ll join ten others in Houston:

Viewers can catch the third debate on ABC and Univision on September 12. If more than ten candidates qualify, the debate will stretch into a second night on September 13.