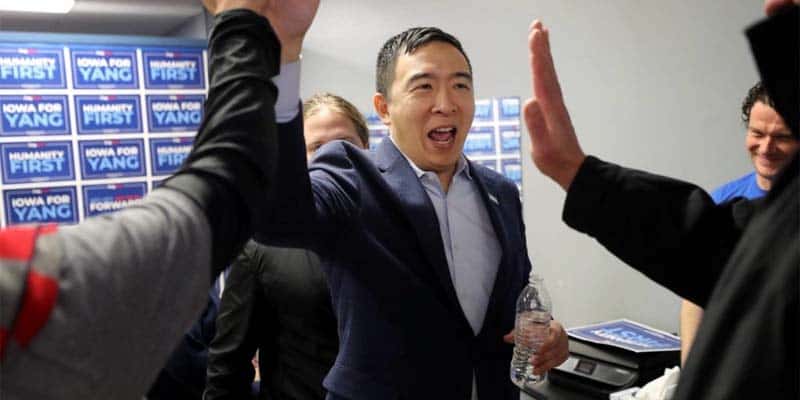 After missing the Iowa debate earlier this month, Democratic presidential candidate Andrew Yang said he would not be denied the stage a second time.

But even the New York entrepreneur probably didn’t predict receiving four qualifying polls on Sunday—two more than he needed.

Yang became the seventh candidate to qualify for the Feb. 7 New Hampshire primary debate after receiving 5% in a new CNN/Univesity of New Hampshire poll. Here’s a current look at who will be on the stage:

In addition to the poll that put Yang over the threshold, he received 7% in a Washington Post/ABC national poll earlier in the day as well as two more, 5% in a national and NH poll, after qualifying already just for good measure.

According to the Democratic National Committee Feb. 7 debate requirements, candidates need to receive at least 5% in at least four DNC-approved national or early-state polls or receive 7% in two early-state polls as well as at least 225,000 unique donors with a minimum of 1,000 individual donors per state in at least 20 states.

Hawaii Rep. Tulsi Gabbard is the only other candidate who has a good chance to make next month’s debate. She already hit the donor requirement and currently has two 5% polls ahead of the Feb. 6 deadline to qualify.

When looking at Yang’s 2020 odds after qualifying for the debate, there appear to be some interesting developments with his chances to win.

The most significant of which is the fact that the oddsmakers at BetOnline still believe Yang is the only Democrat favored to beat President Donald Trump.

Perhaps even more intriguing is what’s happened to Yang after examining the odds to win the 2020 presidential election compared to the Democratic nominee betting chances.

Despite slipping from +1200 to +2000, an implied probability of 7.69% to 4.76%, to win the Democratic nomination, putting him in sixth place, Yang’s odds of winning the ultimate prize—the White House—remain unchanged.

In fact, Yang’s nominee and general election betting odds are now identical at +2000, a 4.76% chance, but he’s positioned higher on the presidential odds board. Because other candidates have fallen on the bigger of two boards, Yang is actually tied in fifth place with Warren and is ahead of Buttigieg.

Below you can see the comparison for yourself. The presidential odds are first, and the Democratic nomination odds are in parentheses, excluding Trump, who is the incumbent Republican.