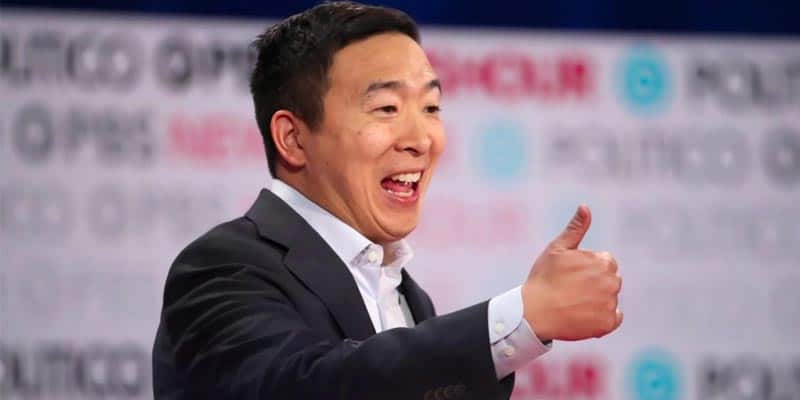 They say you only get one chance to leave a good first impression.

While not an exact science, the latest favorability ratings for the 2020 Democratic presidential candidates with odds show one contender having a positive impact on the race.

Entrepreneur Andrew Yang’s betting odds have mostly stayed firm in the top 5 or 6 over the past couple of months. Still, it appears he is finally cracking through on one of the most important metrics used in politics, i.e., Do you like this person?

According to a Morning Consult poll for pre-debate and post-debate favorability, Yang jumped into the top four and had the most significant increase, with 7% of respondents walking away from the December Politico/PBS NewsHour Debate with a positive impression of the one-time “longer than longshot” candidate.

Here’s where all the candidates stand among likely Democrat primary voters following the sixth debate on Dec. 19:

It’s possible that the sixth debate impressions will have an effect on the next round of polling, which Yang will need to qualify for the seventh debate in January.

The threshold has been raised by the Democratic National Committee, and while Yang has easily surpassed the 225,000 unique donor requirement with over 350,000 individuals funding his 2020 presidential campaign, whether he can get enough qualifying polls put his chances up in the air.

The DNC now requires 5% in at least four national or early-state polls or 7% in two early-state polls. To qualify for the Jan.14 CNN/Des Moines Register debate, the thresholds must be met by Jan.10.

Currently, Yang has only received one poll of 5%, meaning he needs to get three more during the Holiday season to make the stage. Only Biden, Sanders, Warren, Buttigieg, and Klobuchar have made the January debate at this time.

Longer longshots have won in the past—such as Donald Trump in 2016—but the #YangGangLove will need to kick it into overdrive with only 38 days remaining until the first votes of the primary season are cast for the Iowa Caucuses.