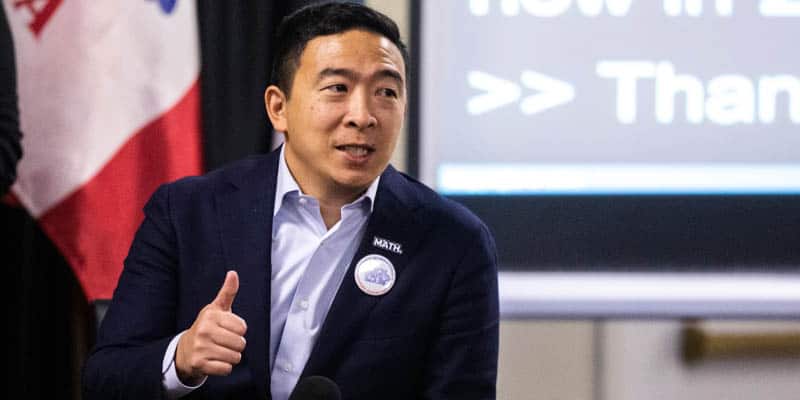 Now is looking like a good time to “Bet on Yang.”

Andrew Yang’s chances of winning the party nomination have never been higher, according to the latest 2020 Democratic nominee betting odds we’ve been tracking since the start of 2019.

His sudden surge came less than half an hour after a new national Quinnipiac University poll released on Tuesday showed him polling at 4% support, which gave him the fourth poll required to make the Democratic presidential primary debate hosted by POLITICO and PBS NewsHour on Dec. 19 in Los Angeles.

Here’s a look at Yang’s nominee odds before and after the release of the debate qualifying polled:

We’ve tracked the 2020 election odds since the beginning of the year, and Yang’s 4.29% increase in implied probability this afternoon is the quickest and biggest jump any Democrat or Republican has received following the release of a single poll.

There are two possible ways Yang’s odds changed this fast and this drastically:

Either way, there’s no question that today’s poll is the single most important of his once “longer than longshot bid” for the White House.

The next debate will feature the fewest number of candidates in attendance since the primary season began, which will most certainly give the New York entrepreneur more talk time than ever before—provided the moderators actually #LetYangSpeak.

Sen. Kamala Harris qualified for the debate but relinquished her spot on the stage after choosing to end her 2020 campaign last week.

The deadline is Dec. 12 to qualify for the next debate, and there are only two candidates with a realistic shot of making the stage before Thursday at 11:59 p.m. ET.

Hawaii Rep. Tulsi Gabbard needs one more poll to make the stage, but she said on Twitter yesterday that she’s decided to skip the “debate” regardless of whether she receives another poll, opting to continue speaking in-person with voters in early primary states.

Sen. Cory Booker reached the 200,000 individual donation threshold since the last debate but has yet to receive a DNC-approved poll showing him at 4% (four polls needed) or at 6% in early states (two polls needed).