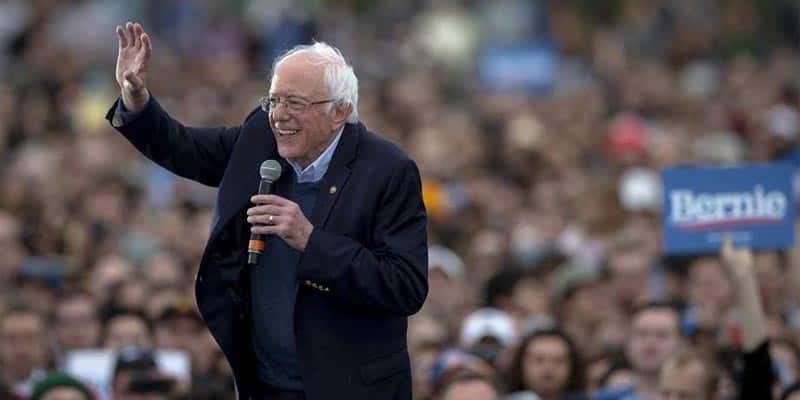 Following last night’s uneventful South Carolina Democratic debate, there has been little to no change across the board in regards to the 2020 election odds.

After winning the most votes in three consecutive early primary states, Bernie Sanders is the clear favorite to win the 2020 Democratic presidential nomination.

The Vermont senator currently has -110 odds ($1.10 bet wins $1) at BetOnline sportsbook, giving him a 52.38% implied probability of becoming the eventual Democratic Party nominee.

Regardless of who wins South Carolina this weekend, each candidate will have no time to rest on their laurels because one-third of the total delegates for the Democratic nomination is up for grabs next Tuesday.

A total of 1,344 delegates could be awarded, and the current Super Tuesday betting odds favor Bernie Sanders winning 12 of the 14 states as well as both the American Samoa caucuses and the Democrats Abroad primary.

To help with your wagers and compare odds at BetOnline sportsbook, we’ve included the FiveThirtyEight Super Tuesday forecast, which predicts a candidates’ chances to win based on their polling data. The 538 forecasts were last updated at 10:30 am ET on Feb. 26, 2020.

Sanders’ betting odds for Super Tuesday favor him winning 12 of the 14 state primary elections. However, 538 projects him to win 13 of the 14 states as well as the contest held by American Samoa and Democrats abroad.

Interestingly, it appears neither BetOnline nor 538 predicts Mike Bloomberg will win any Super Tuesday states. Bloomberg’s odds are currently not favored in any primary despite spending over half a billion dollars on targetted campaign advertisements as of Feb. 24.

Here you’ll see which Democratic candidate is favored to win each state or jurisdiction on Super Tuesday with the state-by-state betting odds immediately following. A political prop bet from BetOnline for “how many Super Tuesday primary elections Sanders will win” has also been included.

Last but not least, BetOnline has released a proposition on exactly how many primary elections Bernie Sanders will win on Super Tuesday.

Currently, the prop odds favor Sanders at +400 ($1 bet wins $4) to win either 10 or 11 primaries on Super Tuesday, which gives either outcome a 20% implied probability.

As far as sweeping Super Tuesday goes, the odds of Sanders winning all 15 primaries held on Mar. 3 (14 states plus American Samoa) are listed at +1800 ($1 bet wins $18), giving the Vermont senator a 5.26% chance to run the table and win every primary election held on Super Tuesday.

How many primary elections will Bernie Sanders win on Super Tuesday?