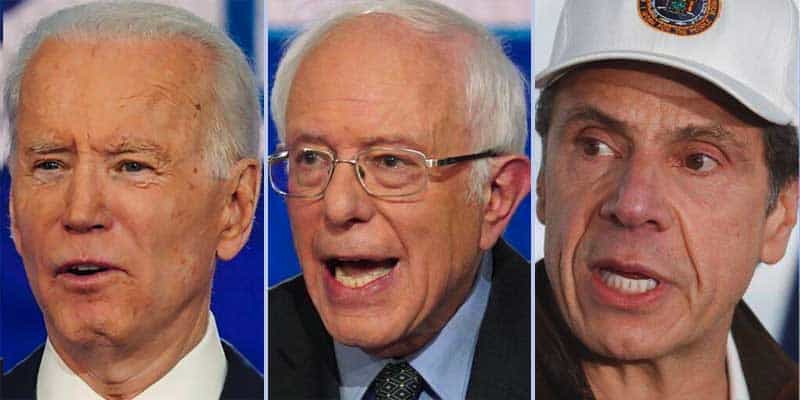 Nominee Odds For Biden Fall, Bernie Underdog To Cuomo Is A Joke

April Fools Day is just around the corner, but the latest 2020 Democratic nominee betting odds show just how much of a joke this race has become to both oddsmakers and political bettors.

However, the ongoing pandemic is no laughing matter, and several states have pushed the pause button on the Democratic primaries to limit the spread of the coronavirus.

New York City is now the epicenter of the outbreak in the United States, and the state became the latest to postpone presidential primary elections over the weekend.

At this point in the race for the nomination, Joe Biden leads the state pledged delegate count by more than 300 over Bernie Sanders and continues to hold for dear life as the Democratic favorite.

Coupling the Democratic primaries postponement and cringe online gaffes are one thing. A recent sexual assault allegation from a former Senate staffer, along with harassment claims from seven other women, is a safe bet to put a dent in Biden’s nominee odds.

After the March 17 primaries, Biden was listed at -2000 and had a 95% implied probability of receiving the 1,991 delegates needed to secure the party’s presidential nomination.

Nearly two weeks later, and without any primary elections held, the former Vice President’s betting odds have fallen to -450, giving Biden a roughly 74% chance of becoming the Democratic nominee—meaning a $450 bet would win $100.

Trump Wins If Cuomo Gets Nom Over Bernie

The top-selling point among the 2020 Democrat electorate this cycle has been voting for the “most qualified candidate” to upset the odds of President Donald Trump’s re-election bid, which continues to rise since declaring a national emergency.

With Biden’s chances slipping at political betting markets and recent polls showing a virtual tie nationwide between him and Trump, Democrats and cable news pundits have begun to ponder aloud for possible Plan B solutions.

Betting on Bernie’s odds would be a rational conclusion if Biden is off the table. The Vermont senator champions nearly everything the Democratic Party wants, especially Medicare For All, which continues to dominate exit polling and will likely see increased support depending on what the country looks like on November 3.

Since politics is a game where self-interests always win, establishment elites and corporate shilling pundits don’t need to make predictions and bet on things logically.

Despite the New York governor facing a potential COVID-19 death toll in the tens of thousands, Andrew Cuomo’s betting odds indicate he’s the second most likely candidate to be the 2020 Democratic presidential nominee.

Cuomo’s nomination odds are listed in second at +750, giving him a roughly 11% chance. Despite having earned as many pledged delegates as you and me, a $100 wager on the NY governor would win an additional $750 if he’s the candidate to face Trump.

But the outcome of the race is now murky at best. Democrats’ neoliberal loins may be burning for a new candidate, but a bet on Cuomo—to be the nominee and then beat Trump—is a pipe dream.

If Cuomo somehow becomes the nominee, then he’ll have a lower chance of beating Trump than “Govern me, daddy” merch has of becoming a “thing.”